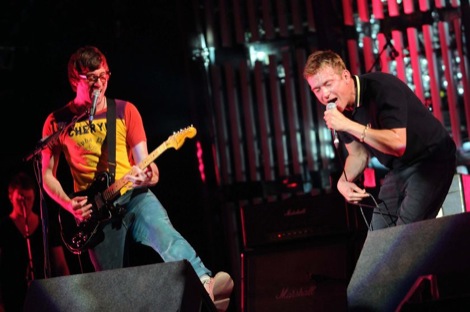 Legends dead and alive cast a spell over that farm down in Pilton. Getintothis Matt Eland makes the annual pilgrimage.

If 2008 was the year of Jay-Z, then 2009 was the year the rumour came true.
Getintothis was in a tent dancing along to a 10-piece gypsy punk band (definite contender for performance of the weekend, if only we’d caught their name) when the news broke; and if you look beyond the T-shirts being printed within hours and the jokes on your phone in the morning, it definitely conspired with the thunder and lightening and the searing sunshine to bestow an apocalyptic atmosphere over the site.

It’s hard not to stand at the top of Pennard Hill at twilight, looking down over the smoke and the sweat and the floating Chinese lanterns and the crowds huddled around the candle flares and not think about life, and the death of a king.
But life is for the living, and what better way to end a long dark night of the soul than with Bjorn Again? Not much to say here except yes, as moves were pulled to busting point, not least during a frenetic dancing queen. And you have to applaud anyone who decides to mix up an old standard by slotting in a rap interlude; the only way for a pseudo-novelty tribute act to survive?
Liverpool’s very own John Smith was well worth the trek to the Acoustic Tent, and he pulls a decent crowd all familiar with his stuff. It’s his multimedia approach to the guitar and lyrical ingenuity that lifts his tunes out of the folk pack, and then there’s that destructive, soaring voice.
During his last song he puts the guitar on his lap and turns it into a percussive instrument – anyone with the patience to learn to play like that has to be the real deal – why else would you bother?
Speed Caravan, over on the Jazz World Stage, bring the first dose of heavy music of the weekend – whoever knew a bazooki could sound so destructive through a distortion pedal? – then it’s Friendly Fires for more silly dancing and engaging grooves.
They take a gamble in dispensing killer single duo Jump in the Pool and Skeleton Boy back to back, but it pays off. A second album could turn them into something really special.
A quick note about Neil Young – my first encounter came with his live album Live Rust, and at the time I’d never heard anything like his guitar sound. So starting with Hey Hey My My, the tempo a fraction slower than usual, is a delightful experience.
It’s a hammering, towering start to the set, and in the flesh that Les Paul sounds like weather, like total, complete destruction.
There’s a lot of stuff from Everybody Knows This Is Nowhere, including a 20 minute version of Down By The River. Rockin’ in the Free World, with its multiple, delightful false endings, is excessively fun, and closer A Day in The Life goes off the beaten track into an abrasive solo and then a cascading wall of noise which ends with Neil destroying the strings on his guitar and letting it feed back into the night, like a fierce old king, descending back to earth to show everyone how it’s done. Then he joins the missus on glock for a few short, ethereal notes. And he’s gone.

Neil Young: Rockin’ In The Free World
Saturday brings the sunshine and it’s over to the Jazz World stage for – who else – Rolf Harris. Let’s face it, Two Little Boys is a monster of a song, Tie Me Kangaroo Down Sport is a childhood favourite and Sunrise is a trippy exercise in simplicity, and Rolf is loving every minute.
The crowd was the biggest ever for the Jazz World Stage, apparently.
Spinal Tap, meanwhile, take a bit of getting used to, but when the inflatable Stonehenge comes out and the midgets start to dance it all makes sense. Plus they can actually play.
Florence and the Machine garner another massive crowd, although unfortunately the kind that feel obliged to hold their own conversations, as loud as they can, over the music.
On first listen, a lot of new record Lungs sounds pretty good, and it’s unusual to see the Arcade Fire meets Kate Bush sound garnering such a teeny bopper audience. Lead single Rabbit Heart is the only duff moment, the cocaine-addled production replicated with some cheap sounding samples.
I catch a few numbers by Pendulum, and during Propane Nightmares everything goes off – even right at the back of the field, where it’s sparse, people are getting down with their bad selves.
I’m left underwhelmed by Bruce Springsteen‘s first five tunes. It’s all very tight, and loud, and fist pumping, but not quite enough of a triumphant introduction to keep us listening.
Backup plan Franz Ferdinand rise admirably to the challenge – every song is a massive hit and there’s room to dance. It all goes a bit prog before the encore, all four of them hitting the drum kit for a tribal hoedown. It raises an interesting question about the general vibe of the headliners this year – not much for the neutral, even if the constant clamour around the pyramid stage would suggest that no one’s complaining.

Friendly Fires: Kiss Of Life (teaser of new track live at Glasto 09)
And so onto the final day, starting with Wave Machines, a band that many discerning friends rave about, and dammit if we’re not won over.
It takes a little while for their pop sensibilities to reveal themselves, but when they do the feet start tapping. Cult stardom could very well beckon.
Over on the healing fields, home of the homeopath, Bad Science author Ben Goldacre strode into the lion’s den to give a little talk. He’s eloquent and charming and speaks passionately about the Daily Mail‘s quest to compile a list of all the foods that cause/don’t cause cancer and food supplement ‘evil fuck’ Matthias Rath. Usually at these things there’s a right-on preaching to the converted vibe, but he’s genuinely ruffling feathers and it’s satisfying to see a few ‘alternative healers’ taken to task on the placebo effect at the Q&A.
Things get bizarre though when a topless, middle aged hippy starts wandering through the cross-legged crowd, muttering about how she’s lost her purse.
Nick Cave and the Bad Seeds are right on form today, and it’ll take a while for me to live down the disappointment at having missed Tupelo as the opener.
Nick looks obsessive and frantic between songs, focused and cool during them, while Warren Ellis writhes around on the floor punching distortion pedals. They’re one suave bunch of old men, and the audience looks either puzzled or concerned about the heat that those beards must be retaining.
Our intention was to see the start of Blur, a bit of The Prodigy, and then Kong, but we’re unable to tear ourselves away from Albarn and the boys, the prospect of The Universal close proceedings just too enticing.
And they’re really good. Out of Time sounds spot-on stripped down to its various components, leaving you wondering at the waste of the past decade, and Song 2 sounds just like it did when you first heard it. Damon even has a little cry, and Graham Coxon snapping him out of it by tearing into the next song is a lovely touch to the set.
Suddenly, it’s all over. Back in our tent, clutching a bottle of whiskey, trying to rally the troops, when we fall fast asleep mid-sentence. Soon after, as if the great cosmic orb has decreed that we’ve had too much fun and should give up the ghost, another thunderstorm starts.