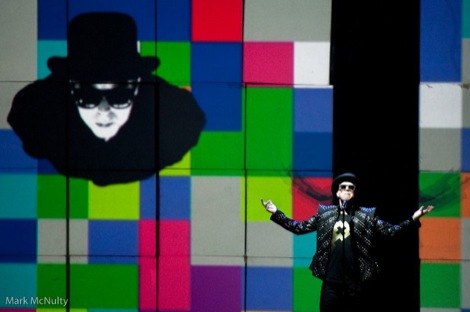 It was a low-key start for the Pet Shop Boys as technical gremlins threatened to scupper their opening. But the first few minutes were about the only quiet thing in the duo’s Liverpool show.
Neil Tennant and Chris Lowe are almost as famous for their eccentricity as they are for their perfect electro-pop and both were in abundance at the Echo arena.
After a false start they opened with one of their biggest hits Heartbeat, appearing on stage with their heads encased in coloured boxes – naturally. From there it was a seamless segue into Did You See Me Coming, followed by a horn- heavy hybrid of Can Your Forgive Her/Pandemonium, prompting Neil to refer to their own ‘little bit of pandemonium‘ at the start of the show.
With a back catalogue Simon Cowell would probably sell his granny for, selecting tracks for a Pet Shop Boys gig must be like trying to choose between your children but the set list was a pleasant mix of old favourites and more recent releases although there was a heavy helping of numbers from their latest album Yes.
There was also a good dose of campness, never more so than when, eight tracks in, the cardboard cube set tumbled down creating podiums for a thumping rendition of the disco classic Go West complete with lycra-clad dancers. It got the three-quarters full arena to its feet instantly as did the clubbed up cover of Always on My Mind a few tracks later. 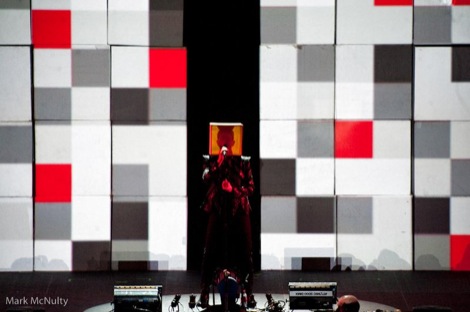 But this show was not just about high energy dancefloor fillers. Tennant also showcased his unique voice on a clutch of melancholic numbers including Jealousy and Do I Have To.
With frequent set and costume changes sometimes it was more like a pop opera than a concert. Tennant went from studded leather jacket, bowler and riding boots to a smart tuxedo for the down tempo section while Lowe accessorised his trademark baseball cap and sunglasses with elaborate headdresses and even donned a discoball jacket at one point.
There was a surprise treat towards the end when Tennant, resplendent in crown and robes, morphed their own 80s hit Domino Dancing into Coldplay‘s Viva La Vida before stomping into It’s A Sin.
But the encore – their first number one West End Girls – was a no- brainer and almost 25 years on it sounded every bit as relevant.
A bit like the boys themselves.


The Brits 2009 Pet Shop Boys medley featuring Lady Ga Ga and The Killers’ Brandon Flowers.
Corking pictures – as ever – by Mark McNulty – go see his blog here and see what got him slightly riled.