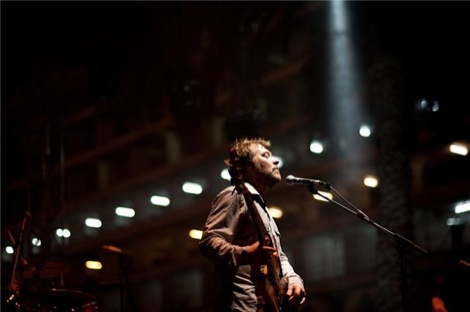 You may have gathered Dubai Sound City is hardly pushing the boat out in terms of edgy, breaking artists.
But that’s not the point. Well, not initially, on this it’s first run out.
To understand the dynamic of the City would take days to explain – I haven’t a clue – but it’s essentially one Godzilla-sized evolving blob made up of every nationality thinkable trying to earn (and spend) a lot of money, fast. As a result the landscape changes at a phenomenal rate – there’s a quarter of the world’s cranes here and seven in every ten taxi drivers haven’t a clue where they’re taking you as buildings pop up out of the desert hourly.
This ever-changing environment means trends come and go faster than they’ve time to be given a name while most of the ex-pats exist on a music diet of what they knew before they left their homeland. Which is why Dubai Sound City’s billing is perfectly suited to the here now. Essentially they’re moving forward at the speed of light, but culturally they’re years behind.
This is why Doves are perfect. While it’d be harsh to suggest they’re dullards, they’re hardly Lightning Bolt.
Solid and consistently first-rate the tunes flow like Dubai’s gold supply. There Goes The Fear (complete with its kit-hammering outro), Pounding (doing exactly what it says on the tin) and Kingdom Of Rust (an apt anthem for the local desert rats) are lapped up appreciatively.
But it’s the melancholic majesty of The Cedar Room which really thrills with Jimi Goodwin‘s lisping hush massaging the senses.
So then, no alarms and no surprises, but job expertly done.
http://www.myspace.com/dovesmyspace