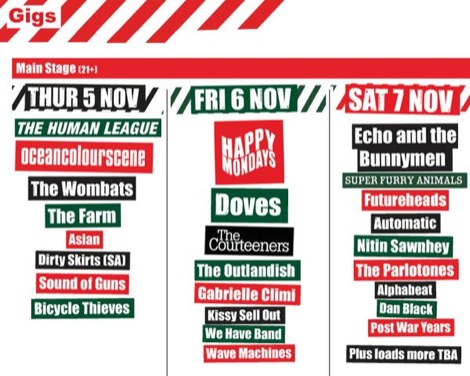 The only time I’ve been to Dubai was en route to Perth – and that was for a connecting flight – even the airport was like an deluxe kingdom!
Later this afternoon, I’m jetting off to cover Dubai Sound City – the hottest winter festival on the planet – quite literally if the 10-day forecast of 93 degrees is to be believed.
Sunstroke permitting, I’ll be reporting online for the Post & Echo from Dubai on all the sights, sounds and happenings as they unfold.
Highs are sure to arrive in the shape of Getintothis favourites Wave Machines, Post War Years and De La Soul, plus there’s fantastic big hitters in the shape of the Super Furries, the Bunnymen, Doves and Ladytron.
Hopefully you’ll follow us on Twitter (twitter.com/Getintothis) where I’ll be bringing up to the minute news and reviews with one of the finest photographers the industry has to offer – Mark McNulty.
In the meantime, if you’re back in Liverpool soak up the spectacular sounds of Liverpool Music Week (or should that be Music Month – there’s SO much on!)
Check as many of the free shows as you can – Wild Beasts, Daniel Johnston, Chrome Hoof and Jay Reatard are not to be missed.
In a bit.
PGx
ps: this is what’ll be on the jukebox while I’m on the plane!