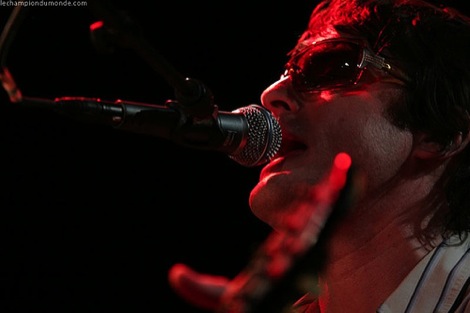 Ladies and Gentlemen, we truly are floating in space.

It seems somewhat ludicrous looking back to 1997, my final year at college, arguing the toss over the year’s best record.
The Verve‘s Urban Hymns or Spiritualized‘s Ladies and Gentlemen, We Are Floating In Space were always the two most tongues wagged about.
Twelve years on and there can be no doubt which has aged the better; one a neat package of singles beefed by bloated stodgebluster, the other a grand spectacle that’s as thrilling today as it was then. The former’s attempt at spacerock now appears more leaden and flat, the latter, for all its intergalactic sonics is at its heart an intelligent exploration of everything it is to be human.
It came of little surprise then, when the obligatory reissue of Jason Pierce‘s masterpiece was released, complete with a fan-salivating assortment of extras (pillbox T-shirts, 12 three inch mini CDs encased in their paracetamol-like silver trays, not to mention two discs of bonus material) earlier this month.
The timing (what significance 12 years?) may have been odd, but the announcement of a series of Don’t Look Back style gigs in support of the reissue was more than welcome.
There maybe almost 20 musicians on the Apollo’s stage, but this of course is J Spaceman’s magnum opus, yet the irony is inescapable in that the first noise we hear is that of Kate Radley‘s monotone voice introducing the title track – she, the ex-keyboardist and Pierce’s ex for whom the vast majority of Ladies & Gentlemen… is primarily focused.
If the record is an exercise in instrumental epic grandeur, its themes are simple: love, loss and struggle – and in the Apollo they’re played out with monumental orchestrated passion.
Backed by a string quartet and gospel choir, the hypnotic cycle of the opener – complete with ECG bleeps – is roundly blown away by the first of tonight’s seismic detonations – Come Together – a whirlwind of self-loathing and bitterness where even the harmonica-imbued final flourish carries horrific traces of blood-curdling wailing.
The simple build and release is a trick replayed throughout, but it never fails to thrill. No God Only Religion carries somewhat of a Pharaoh’s march, all sax bravado and pomp while the 20 minute Cop Shoot Cop manages to captivate and induce near blindess as every instrument rattles your bones and fearsome strobes slice the tips of your eyeballs. Somewhere in the din you can hear people gasp.
Of course there’s endless moments of tenderness and subtlety too. After the cacophonous rush of Electricity, Broken Heart betters its recorded version as the timpanis roll with added gusto, brass and woodwind float amid the upper reaches of the circle and the strings yank at the soul.
Phil Spector-like throughout, Pierce remains seated, occasionally sipping from a teacup, but fully in control of his charges. Indeed, Stay With Me is stopped midway through and restarted for little apparent reason but when it kicks in and the backdrop lights up, glimmering all crystalised blues and greens, it feels genuinely spiritual.
With the record complete, we’re treated to one last treasure – Out Of Sight, the highlight from 2001’s Let It Come Down; like everything before, it’s a masterclass in big and bloody beautiful.
The trumpets power up once more, the choir belt out a final blast and Jason claps the standing ovation before sloping off in his silver slip ons.