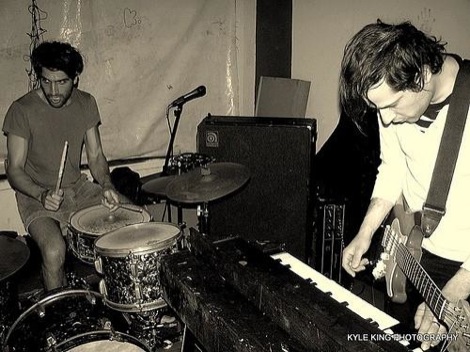 To anybody who had been anticipating the gig, it should be reward enough that Baltimore-based Thank You took to stage at all.
Plagued with rumours that the show would not take place, amid worries about attendance, it took all of promoter, La Racaille‘s, DIY skills and sense of endurance to throw the show together at the last minute.
All could have been so easily lost. For those who did make it there however, ushered by down-to-the-line haranguing or tempted from the grizzly rain by the offer of warmth and a freebie some hidden musical gems were to be found.
Noise-geeks Spitting Cobra opened the evening in brash form, each member thrashing their instruments into a distortion drench wail of noise and groove based riffing.
Sporting a University of Liverpool lecturer as one of their members, one wonders whether the sheer volume is a way of letting off stress after a hard day’s work. In that aspect at least Spitting Cobra thrive, however, they lacked the precision and subtlety amongst the stomping grooves to fully envelope the senses as their ‘wall-of-sound’ style noise-music seemed to be attempting to do.
Given the gorilla nature of the show, there were few bands more suited to take the stage as We Came Out Like Tigers. Not content with the lack of hardcore scene for musical experimenters around the Mersey, WCOLT simply got out and created their own. They even have a magazine to prove it. The crowd in Korova that night is very much their crowd.
Not that it matters. From the outset they launched into a set that hurls together their scrap-pile of influences like pans in a washing machine.
Cheering the calamitous crash of noise on is ever-contorting frontman and violinist Simon Parr who hurls himself around the stage and across the floor with wild abandon as his vocals leap from gibbering shrieks to shuddering spoken-word poems faster than any sane ear could possibly hope to catch up.
If one were to make a comparison of style, only post-hardcore cult legends Circle Takes The Square with their controlled chaos or Rites of Spring‘s attempts to build an innate musicality into their punk influenced sound come to mind.
But make no mistake, We Came Out Like Tigers are no rehash of former 90s glories for nostalgic fans of underground music. They are entirely new. Entirely Liverpudlian. And utterly refreshing.
After the sheer rush of energy, Thank You‘s thrashing almost seemed somewhat sedate.
However, over the course of their relatively short set they proved that the UK does not have a monopoly on new and exciting noise-smiths.
Live, Thank You ran rough-shod over anybody hoping to come away with a functioning set of earlobes, screeching and hacking out as many jarring atonal crashes as they could without simply becoming a trainwreck of distortion.
Certainly they are niche band but then again, their eccentric take on music is refreshing and they are welcome back to these shores to hammer our hearing any time they so choose.