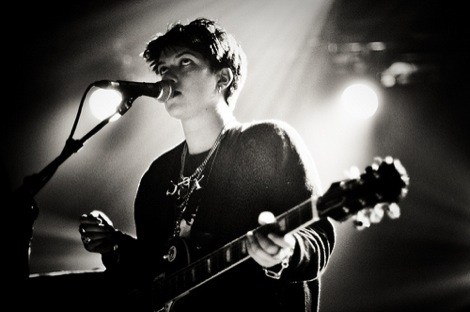 It must have been noted infinitum that something very special was at work when four childhood friends delivered the album of 2009. But it’s equally been noted that such is the effortless intimacy, enigmatic sensitivity and somewhat glorious innocence at work on this most remarkable of debut records that it’s hard to imagine how the xx go about capturing this in future days.

Let alone building for future glories. How do they remain cut off and unsullied from not just divisive outside influences but the new world of expectation which showers them with rhetoric?

The answers aren’t known but on the evidence of their performance tonight, it’s a nailed on certainty that they’re able to rise to the task and back up any hyperbole directed their way.

How fitting then, that the closing night of their rearranged debut UK tour is in the setting of the country’s finest venue, and that they’ve prevailed against losing band member Baria Qureshi and a cancelled European tour after the death of Romy Madley Croft‘s father.

There’s a sense that they’ve tackled and won some of their toughest battles already. But proceedings don’t kick off exactly to plan, as there’s obvious anxiety and understandable glass-cutting tension in the air as Oliver Sim swings his bass for the first time and Jamie Smith click clicks those index fingers into place for their opening number. Croft barely daring to look up from her fret board as the minimal Intro drone plumes into The Kazimier octagon and everyone holds their breath. Deep intakes of breath.

Then: WAAAAaaaaaaaaaooooooo – Crystalised‘s signature riff clops into range and there’s an audible release of the shoulders, body’s start to flicker, smiles break as the odd arm reaches aloft the smoke as Sim fights back a humbled gleeful grin. Croft, peering through her fringe takes in the scene and so too noticeably relaxes while Smith – like the remaining 80 minutes barely seems to register he’s performing – more flexing his fingers DS-style.

Inescapably their sound is so unified and coherent it’s quite impossible listening to xx and imagine throwing the tracks up in the air and watching them be jumbled around and still making sense, yet tonight they are and they do make sense – perfect fucking sense.

Where VCR stands as the big LP opener, here it’s tossed in midset and yet glides effortless into sync wih an almost ecstatic Basic Space which finds everyone singing (quietly, respectfully) in unison as mini pockets on the crowd unfold into dancing squares. Similarly Islands acts as a kind of rave for the Shuffle Yer Feet Generation.

Lighting, like everything else is minimal but plays it’s part, as Sim’s bass weaves in and out of the curtains of purple rays during a particularly affecting Fantasy as Smith noodles away on the droneometer. Better still is the reimagined cover of Womack and Womack‘s Teardrop as Croft and Sim utilise that call and response vocal to maximum effect.

Understated and measured, the trio reserve their one true moment of bombast til the finale – and what a finale – Infinity‘s guitar noir echoing and feverishly clambering up the spine, weaving a delicate devilish erotica until Sim dispenses of his bass, picks up a set of timpani mallets and unleashes thunder on a cymbal as Smith lets the bass rain down.

They return briefly, for a clearly emotional Stars as the backdrop glistens and the smiles return across Croft and Sim’s faces. It’s a magical occasion and even the more magical to know that this is just the very beginning.
Setlist:
1. Intro
2. Crystalised
3. Islands
4. Heart Skipped A Beat
5. Fantasy
6. Shelter
7. Teardrops
8. VCR
9. Basic Space
110. Night Time
11. Infinity
Encore:
12. Stars

Opening act Glasser, meanwhile, are ones to watch – combining violent vocal ticks, electro pulses and arctic Oriental beehive fashion which The Knife would surely approve of. Good thing too as they’re irregular groove was certainly in keeping with the Scando loonpots.