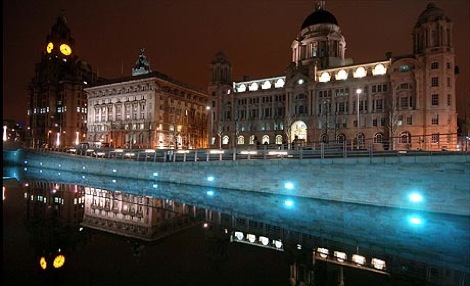 Sitting on the couch, searching for an angle when suddenly Sean appears on Facebook
Chat and just blurts out the obvious, ‘just say SOUND CITY IS BLOODY BRILLIANT.’
He’s right. I love Sean. And I love Liverpool Sound City.
I love it because it takes place in my home city – my favourite city in the world.
And it’s emergence has coincided with an artistic and cultural renaissance which over the last few years has transformed town into a daily bussle of not-to-miss happenings.
Take last week: the legendary Gil Scott-Heron popped in to the Philharmonic Hall to deliver an outstanding set of banter and blues to launch Liverpool Sound City Part Three.
Meanwhile uptown, on it promoters Samizdat were celebrating their fourth birthday party by hosting Foals‘ first outing on their new tour at the UK’s best new venue, The Kazimier, all of which followed a heady week of ear-indulgence from the likes of The Bronx, Black Rebel, Pulled Apart By Horses, Times New Viking and our very own The Seal Cub Clubbing Club.
The party in the Pool of Life has never been this good. Andrew WK is our patron.
Which brings us to Liverpool Sound City Three. It seems only yesterday we were watching The Black Lips locking tongues on the beer-soaked stage of the Masque Theatre yet in between last May’s extravaganza we’ve been lucky to travel to the land of lucre and lunacy for Dubai Sound City – a spin off of the Liverpool event.
Though, the music wasn’t as vital as it’s bigger brother on Merseyside, Dubaiproved that festival director, Dave Pichilingi and his team, are on to something very special – the sense of enterprise, anything is possible and an emphasis firmly on good times – the beast in the east was one that’ll live long in the memory.
Attempting to follow last year’s Liverpool spectacular though, won’t be easy – but
proceedings are shaping up more than well to ensure there’s every chance.
Over the course of the next few days I’ll be editing the official Sound City magazine, The Liberator – think of it as The Pink Echo of the festival where you’ll find a host of reasons for why myself, Sean and many, many people love Liverpool Sound City – the bands (be it the critically adored or the unsigned unknowns), the industry cats who are here to
spread their wisdom at the daily conferences, the places to see and do, an alt guide to the city and much more.
Keep your eyes peeled for The Liberator (it’ll be in all live venues and various cultural hangouts during the fest) and will include comprehensive reviews, banter and opinion as the action unfolds plus you can follow us on twitter
at http://twitter.com/Getintothis or read more about the festival at www.getintothis.
co.uk where we’ll have a bounty of words and pictures.
In the meantime, peruse the listings, get your groove on and jump in the Pool.