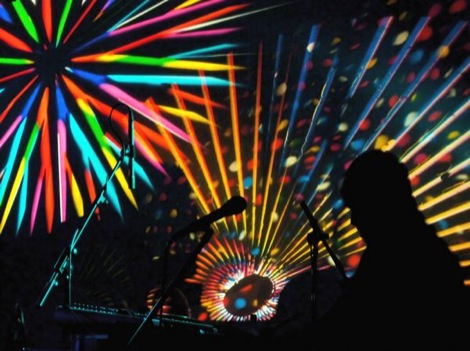 but
Matt Eland on a band that defy labels and transcend the boundaries of noise.

Post-rock has a certain reputation.
A long, slow instrumental build up, followed by a wall of noise. And maybe some screaming. But Mugstar, as their career have progressed, have decided to start with the volume, and persist with the riffs until they become transcendent in their relentlessness.
They go straight for the jugular tonight in the Kazimir, with a resolve that’s at odds with the vaudevillian dÃÂ©cor.
Guitarist Pete writhes around with his guitar while the others get their heads down.
The simplicity of some of the beats belies the complexity of his synth playing; it commands all their attention, and ours.
There’s only one digression into the quieter stuff, which comes nearer to the end of the set, and proves less of a concession and more of a gear change; there’s still that taut tension in the air.
The light show is stunning – an equal to a quite remarkable performance by one of Liverpool’s must-see live bands.