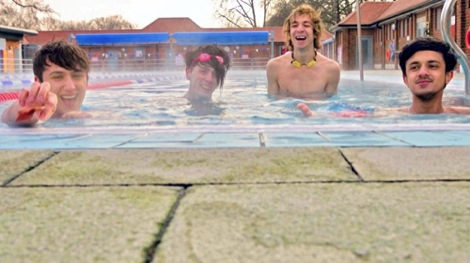 Away from Liverpool Sound City, Eel Pie mavericks, The Mystery Jets were causing ripples as part of their Chevrolet Spark Unscheduled Tour aboard the Mersey Ferry. Getintothis’ Luke Traynor dons his deckshoes to lap up the action.

It looked like we wouldn’t be needing our sea legs after all.
The audience was stood waiting on the Pier Head jetty, but there wasn’t a boat or any Mystery Jets to be seen. Well, the vessel actually WAS in our sights.
But the small problem was that it was moored on the wrong side of the Mersey, about 2000 metres away.
The rumour abounded that the Mystery Jets had gone AWOL, and our 60 minutes of music on the Mersey certainly looked in jeopardy.
Such speculation was quickly dispelled by the PRs, and we were encouraged to enjoy a drink in the stunningly-located Mantou, above the ferry terminal, and wait.
We needn’t have worried, as close to 9.45pm the boat suddenly appeared, musicians in tow, and we boarded only 10 minutes later than planned.
It was a unique set up. With just 50 or so in the audience, and a small section of the Saloon Bar roped off, it meant we could all get pretty close, almost camp right on top of them.
Being new to this Twickenham lot, the first thing that struck me is their look, the five-piece doing a nice line in drainpipe jeans, loud Hawaiian-type shirts and suit jackets.
The Jets, recently supporting Arctic Monkeys on tour, had decided to play a fair amount of new material, but proceedings really got underway with Half In Love With Elizabeth.
Sung with exuberance by singer Blaine Harrison, it’s typically strong Jets fare, demonstrating the band’s poetic and wispy ramblings about love lost.
Blaine’s an interesting creature, almost a double for that teenage rebel Marmalade Atkins, his long unkemt hair swaying across his face, almost hiding his features, like the branches of weepy-looking willow tree.
Still, the look seems to go hand in hand with the sentiment of Flakes, a lovely meandering ballad of no little beauty which was sung with melancholy abandon by the small crowd.
Next was the infectious Hand Me Down, Blaine’s wailing falsetto vocal resonating with the words, ‘Your heartÃ¯Â»Â¿ is like a hand me down. Something to pass around and around.’
The ante was then upped with Hideaway (most of last night’s songs were, in fact, taken from the album Twenty One), the almost discordant chanted chorus echoing brilliantly across the boat, and out onto the waters of the Mersey.
A word about our surroundings, it was fantastic to see the sights of Liverpool in the windows as we floated by, the imposing Liver Building, the ECHO Arena, the Big Wheel, casting a dark shadow over us as we trotted up and down the river.
There was almost an argument for staying up on top deck, and letting the Jets’ sounds drift upstairs as Liverpool’s stunning waterfront passed on by.
Apparently, Eel Pie Islanders are hugely-inspired by errant Pink Floyd psychedlic frontman Syd Barrett and the fragile yearning apparent during the band’s more tender moments brings that home.
The Jets kept up their impressive sound all night, well-crafted swirling pop songs that don’t really lead to where you’d expect, with some genuinely strong musicianship on show.
One of the night’s climaxes was Two Doors Down, a brilliant three minutes that seems to recall The Smiths during its verse, but then reverts to a dollop of the 1980s for its keyboard-inspired chorus.
Blaine seems a natural pained frontman, spending the gig sitting astride his keyboard chair like it’s his office (spina bifida from birth means walking is difficult for him), revelling in the infectious anguish, as he leaves the audience banter between songs up to his mates.
The fun ends at around 11pm, when we slide into the Pier Head ferry terminal, with Behind the Bunhouse, Blaine’s genuinely touching solitary vocal, accompanied by Nick-Cave-esque menacing strings, leading to what I could best describe as a riotous sing song.
Oh to be knocked over the head with a rolling pin, and then be kicked in the ribs behind the bunhouse.
Passion-fuelled violence at the government social security office, or the pasty shop.
Either way, or neither way – marvellous.