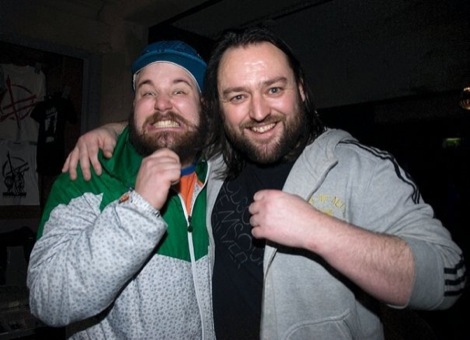 From DJ sets with Ladytron, to forming his own superclub before masterminding Liverpool’s resurgence in the live sphere, Steve Miller is friend to everyone involved in music within the city. On the eve of Liverpool Sound City 2010, Getintothis talks to the man responsible for shaping this year’s line up. You may know him as Revo.

Getintothis: Hey Steve, firstly introductions, you’re known throughout Liverpool – and indeed the wider music community – as Revo Ziganda – where did the name originate?
Revo: It’s something that developed when I was djing to get through Uni in Manchester. I had a bunch of real clowns as friends, we partied a lot, they’d shout stuff when I was spinning, it just formed and then it stuck, it’s been a cross to bare ever since… but hasn’t been too bad.
Getintothis:: It seems a bit daft interviewing a promoter, however, you’re almost single-handedly responsible for breaking uber-hip talent in the city, welcoming a wealth of UK and international bands to Liverpool and also encouraging new upcoming promoters to get involved. Give us a bit of a insight into how you started out and about your club night – Evol.
Revo: Reuben (Wu) from Ladytron used to practice on the decks with me, we’d spend hours trying different records out, they went and toured the world, came back after their 2nd lp and wanted to start a new night in Liverpool, just something we could do together and invite our friends to hang out at and let their hair down.
EBGBs was opening up after a period of closure and the basement became the perfect hideout on a Friday night.
We had eight months of great times down there and it was a magical period before the venue closed again and we moved to the then Carling Academy and then later Korova, which was an extension of the clubnight, rolling out all our ideas into a place that we could go to week long, watch great music and invite our friends to play at. Evol developed along the contours of Liverpool embracing the new and follows in the traditions of Erics and Planet X.

Getintothis: What gigs are you particularly pleased with over the years? Have you endured any nightmare scenarios? Any bands you’ve put on and just thought, ‘oh no.’
Revo: Recently we’ve had some great shows from bands like Animal Collective, Deerhunter, the xx, Delphic, Wild Beasts and HEALTH.
But going back the first one that gave me goose pimples was our second live show at EBGBs, Bloc Party had been our first show in 2003 and had given us a taste, but this band called Weird War came over from Washington DC and their lead singer Ian Svenonius was something I’d never encountered before.
It was black lit with spotlights, sweat and blood and a wired preacher man. I woke up the next day knowing that something special had happened in the bowls of EBGBs.

Then we had Erol, Miss Kittin, The Faint, The Gossip, The Arctic Monkeys and Death In Vegas who all played fantastic shows at the Academy, and from the Korova years there are quite a few, The Rascals, CSS, Reverend & The Makers, Friendly Fires, Metronomy, Liars, Foals, Holy Fuck, Tapes N Tapes, Florence And The Machine, Late Of The Pier and Fucked Up which was by far the craziest show thanks to Pink Eye.
Oh, and of course 2manydjs in a 150 cap room, almost career suicide but was the stuff of legend. 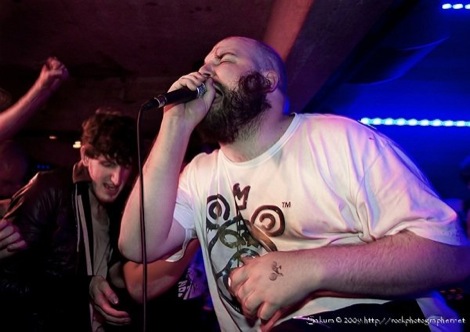 The show I wish we hadn’t bothered with in the first place was Chromeo at Korova and the biggest handful to manage was definitely Anton Newcombe from the Brian Jonestown Massacre.
Getintothis: Bringing things up to the present, Liverpool Sound City is around the corner and this year you’re the chief booker. Who are you looking forward to see?
Revo: I’m hoping to see more this year, when you’re working multiple venues at once you get glimpses of things, five minutes of The Invisible, then a slice of Santogold, then off to the office to do something while all is whirling around you.
I’m hoping some of these will be my personal highlights this year, Wax Fang, Jim Jones Revue, Mugstar, White Hinterland, Archie Bronson Outfit, Everything Everything, Sleigh Bells, Holy Fuck, Male Bonding, Titus Andronicus, Wild Beasts, Esben & The Witch, Is Tropical, Fionn Regan and Beth Jeans Houghton.

Getintothis:: Do you get chance to enjoy yourself?
Revo: Yes, it’s hard work but the enjoyment is in the work
Getintothis:: Liverpool Sound City branched out to Dubai Sound City last year, which you helped out with, how was that? Any particular memories you’d like to share…
Revo: Dubai is a dreamlike place, it doesn’t seem real although it clearly is very real, almost an alternate dimension, a shimmering Arabian Las Vegas. The festival’s launch show with Ian Brown at the Madinat Arena is something I’m proud of, after months of hard and sometimes very frustrating work to see the fruits of your labour coming to life with thousands of people in a strange far away place worshipping a bloke from Timperley gives a great sense of satisfaction. 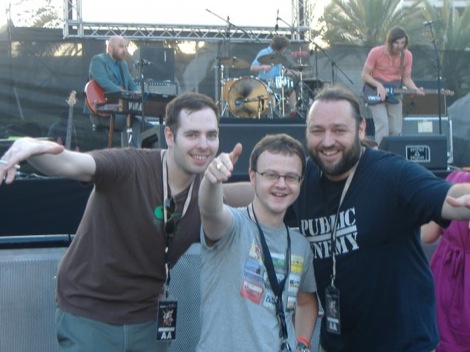 The festival itself was bizarro, it’s what happens when you put Liverpool’s young guns with The Farm in a desert with an ocean of booze.
There are many hilarious memories from that, many of them include an energetic soul called Peter Guy, Darren Roper, Sam Mumford, Wave Machines, Bicycle Thieves and reservoir drinkers Sound of Guns.
Getintothis:: Your posters are great, who designs them?
Revo: We’ve been fortunate to have some great artists work for us over the years, Reuben kicked things off in the early days, then Nathan from Delta Fiasco, the man like AJ, and now things are firmly settled with Gary McGarvey or Horse as he’s know to his friends. You’ll find him at Screenadelica, an exhibition of band poster art he’s curating held at the old Rapid site during the festival.
Getintothis:: Fantasy gig time, who would be your three bands dead or alive you’d dream of putting on?
Revo: Snoop Dogg, Public Enemy, N.W.A.

Getintothis:: You’ve 3,174 friends on Facebook – how on earth do you deal with blaggers?
Revo: Delete
Getintothis:: The fire at Korova was a shock to everyone – you must have been gutted when you found out…
Revo: Yep, I was, the killing stroke in a long twisting tale. It was just sad to see the place go out like that when things were turning in the right direction. The old Korova holds a place in my heart and I have fond memories of my time there and the stuff we did, they were good years. The place was a community.
Getintothis:: What’d be your advice to people starting to host their own nights?
Revo: Work hard, stick to your guns and vision. Enjoy it. Don’t book anything that you wouldn’t listen to at home.
Getintothis:: Despite the cynicism, Liverpool’s Capital of Culture year seems to have kick-started something of a renaissance in the city, what’s your thoughts on the creative spirit in Liverpool as we start a new decade? Who/what artistically excites you in Liverpool?
Revo: That year was a breath of fresh air, it gave the city confidence and renewed pride and it changed the stale outdated outside perception of Liverpool. The scale of development and the speed of the changes during a global recession has been startling. Liverpool has always been a warm welcoming exciting place to be, people fall in love with the city and right now we’re in a good place in time, it shows what can happen with belief.
Revo: I’m enjoying what venues like the Kazimier have been doing, what happens there is off the hook.

Getintothis:: Away from music, how do you relax?
Revo: I’m going to try and figure that out in June when I’m going to take a break, it’s been a marathon seven years with three years of concurrent festivals and the lifestyle can take it out of you.
Getintothis:: What records in 2010 have struck a chord, any hidden gems we should investigate?
Revo: So far, Four Tet, Caribou and Trans Am albums have been great and I’m looking forward to the Male Bonding record.

Getintothis:: You’re holding a celebrity dinner party, who are the first five guests (dead or alive) you post invites to?
Revo: Prince, Jack Nicholson, Don King, Ray Mears, Hilly Kristal.
Getintothis:: Anything else to declare?
Revo: We’ll see what happens over the summer…