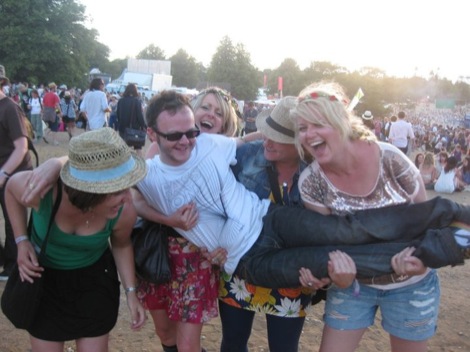 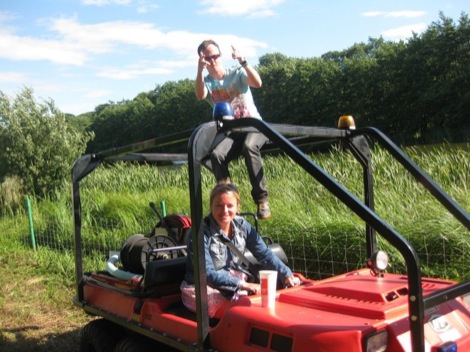 Park and ride Latitude style.
SATURDAY:
Black snot. No this isn’t a new band from Brooklyn everyone’s digging. It’s the stuff everyone’s digging out of their noses come Saturday morning.
For, despite another mini downpour, the sun’s out in force once again and there’s a hazy dust settling on Henham Park.
Early day plans are thus: Utilise snazzy passes to access toilets WITH FLUSH. Down posh coffees. Devour pastries and full English. Devise meeting arrangements with our posse over in camping point ‘Green’.
All’s going swimmingly, until we’re halted on our mission to enter the main part of the site by a whopping queue which seems to tail off somewhere near Norwich. We can hear Chief blasting out from the Uncut Arena but access is delayed for little apparent reason save for their being a lot more people than previous years.
Having a buggy seems your best bet of gaining swift entry but alas I tend to walk these days and 45 minutes later we’re finally in having missed most of Chief.
From a distance they sounded like track 14 on your average Uncut compilation anyway and we’re perked up when we stumble pass a quartet of ever-increasingly famous bods.
Kevin Eldon (he of Jam/Brass Eye) – it takes me so long to describe who he is my friends are way passed caring. Simon Amstell – ‘oh, I like him,’ says Katy, sounding vaguely impressed. Keith Allen – ‘it’s yooooooooou!,’ I shout rather like I’ve unmasked a bad guy in a superhero comic book. And Jarvis Cocker; who really is a superhero, so much so we giggle, titter and whisper with such indiscretion Jarvis is noticeably smirking. 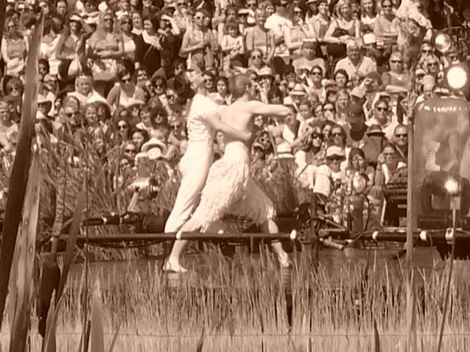 Culcha, darling.
Back to the job at hand, we’re repositioned stage right of the Uncut Arena waiting for School of Seven Bells. Two things cross my mind: a) Will their voices be high enough in the mix? b) Am I really that much of a music geek as all’s I’m really arsed about is getting a great view of the Deheza twins.
I needn’t worry, their hypnotic vocals are like liquid glasscutters while visuals are blasted on to the bigscreen in an array of soft-focus montages as the clearly horny cameraman segues between the two, paying alarming attention to their lips. It’s like krautrock softporn and I’m half expecting a gushing foam party climax. But there isn’t, so we exit ‘appy and mildly aroused. 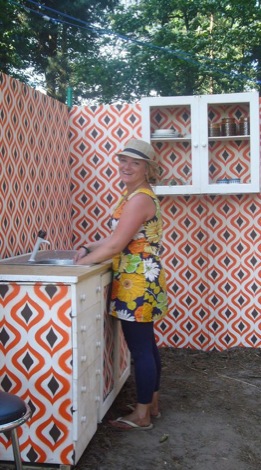 We found a kitsch 70s kitchen in the woods, so naturally found a bird only too happy get in it.
A mini downside of Latitude is you have little chance of seeing the main comedy/literary draws unless you park your arse and don’t move it for several hours. So for those, like me, that run round catching all manner of music bobbins, you’re best just sticking precisely to that.
When we rock up to the Literature Tent an hour and a half early in the vain hope of listening to Brett Easton Ellis only to find a 20-deep crush outside the tent, I find myself bizarrely adhering to a text which reads: ‘We’re about to watch James. Get involved.’
I realise at this stage my scene points have just flatlined but much like The Farm at Dubai Sound City, the sun, happy songs and happy people do wonderous things to your state of mind – and James really are fucking great.
Sometimes, Sit Down, Laid, Ring The Bells and Getting Away With It (All Messed Up) are impossibly unsingalongable and the sight of Tim Booth doing his ‘epileptic-Ming-the-Merciless’ routine never fails to raise a smile. 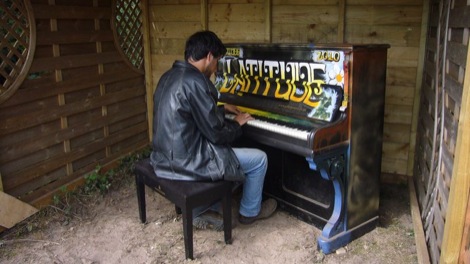 Jools Holland gets everywhere.
After a five minute regrouping, discussion turns to scran and/or whether to see Crystal Castles. Laura’s not really convinced by my awful description of ‘noizy blips’ but I back this up with the winning persuasion of ‘something always happens when they play.’ It certainly does. And what followed next was literally AMAZING.
For 15 minutes hooded droog Ethan Kath pumps brain-melting beat-shreds while Alice Glass stalks the stage like Tim Burton‘s wet dream.
There suddenly seems to be an army of teenagers all going batshit as first Baptism, then a harder, faster, scarier version of Celestica sends the crowd into dementia. Events then spiral into the CRAZIES as Glass screams summat along the lines of: ‘I heard someone was gang-raped, if you know who they are castrate them – it’s f*cking easy.’
She then slugs from a bottle of Jim Beam, jumps into the crowd, shouts: ‘If you grab my f*cking tits I’ll kick you in the head,’ kicks someone in the head, jumps back on stage, smashes the drumkit, jumps back in the crowd (twice), unleashes more punches before finising up on stage only to hock the type of loogie Frank Rijkaard would be proud of.
There’s lots of booing, some cheering and a state of sheer confusion. It’s quite probably the most unsettling, un-Latitude affair possible – which in itself is to be applauded. 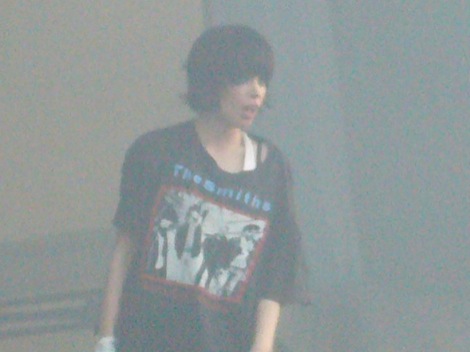 Ultraviolence unleashed (particularly at 5.51).
Read fan who got smacked/grabbed Alice’s breast, version here.
Sadly all this excitement means we only catch a piffle of The Horrors doing Sea Within A Sea. It’s gorgeous and the purpley-pink strobes which weave their way out of the tent are like giant psychedelic vines desperate to pull me in.
We can’t as we’ve barely time for a toilet stop, consume one of Maxwell’s posh haloumi beefburgers and grab a decent spec for returning old lovies Belle and Sebastian. 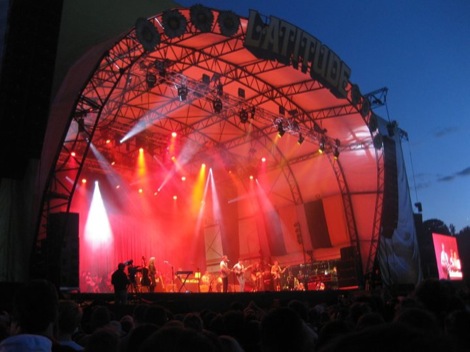 Scotland’s finest skipperty-pop band Belle & Sebastian.
Two minutes in and we’re arguing with fellow B&S uber-snob Laura; who – despite knowing every intro within seconds and every lyric from every single song including all the early EPs and B-sides – is adament If You’re Feeling Sinister is their first album. I argue it’s Tiger Milk.
And in between a rousing version of I’m A Cuckoo, a beautifully tender Fox In The Snow and quite brilliant The State I Am In, a rucksacked dude wearing the kind of trucker’s cap adorned by nomadic psychopaths in 80s B-Movies turns and says veeeeeeeery slowly: ‘Can I just settle this once and for all?‘
There’s a pause, like he’s about to reach inside his bag, produce a clawhammer and kill us both – in what would surely be THE BEST DEATH SCENE EVER. Like, what could be more perverse than dying at the hands of a clawhammer-wielding lunatic while watching Belle & Sebastian?
Before adding: ‘Belle & Sebastian’s debut album is Tiger Milk.’
‘Waahaa!‘ I shout like a dickhead, and then we all dance like dickheads as they play Jumping Jack Flash – AMAZING!!!
Prior to their set, it was somewhat hard to get too carried away by their headliners status but tonight everything slots into place; the magnificent orchestra, Stuart’s playful banter and his Ealing Studios t-shirt, the audience members invited on stage to skip along, the sodding recorder solos, the faintly-sinister lyrics concerning ‘bible studies and S&M‘ – it’s a set of riches from start to finish and what better way to round off than a delirious charge through Legal Man.
Fun follows deep into the night and early morning and we dream lots of rad things while wondering if there’s ever been a better band name than Black Snot? 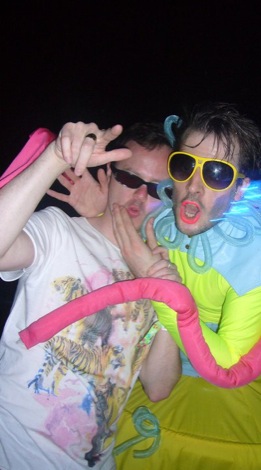