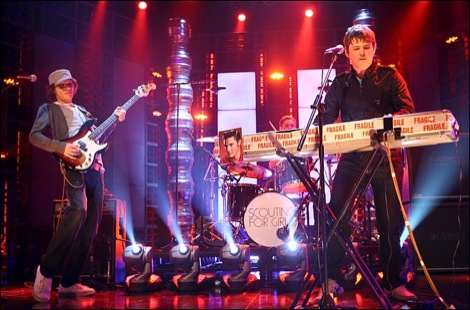 Prior to our World Cup sojourn, we needed a super fan to go see the band the critics love to hate, and the fans really, really love. Unfortunately, it was quite short notice, so we got Lousie Pearce. Here’s Louise’s uncensored insight into UK pop’s biggest draw, Scouting For Girls.

As I paced around backstage, there was excitement and nerves etched on the faces around me.
The tension was rising. Here I was at Liverpool University’s Students Union with a bunch of competition winners waiting for their heroes to emerge.
The chart sensations who back at Easter knocked Lady Gaga off top spot. The West London trio who the critics love to hate.
And then it happened – in walked Scouting for Girls.
In truth my best mate Natalie Lawrence and myself felt like frauds. For starters, we were the only ones not clutching a copy of their second album Everyone Wants to be on TV.
Admittedly, I’d had the odd sing song to the boys’ infuriatingly catchy indie-pop but I wasn’t in the same category as these die-hards.
Roy Stride, Greg Churchouse and Pete Ellard met at school and in the cub scouts. They waltzed in to meet their adoring public with a look that suggested they still can’t believe they’ve achieved their boyhood dream of pop stardom.
As they started signing giant posters of themselves, I found myself at the front of the queue.
There was the typically handsome frontman, Roy, the quirky long haired one, Greg, and the other who is on the rough and ready side of good looking, Pete.
Small talk swiftly established they’d spent the afternoon in the Philharmonic pub and were mightily impressed with the historic toilets.
‘We’re more pub blokes rather than posh bars and clubs,’ Roy said.
I asked them where they were going later in a desperate bid to earn an invite to a glitzy aftershow party but failed.
‘I don’t think a big night is on the cards,’ Pete added.
‘But next time we’re here we’ll need to ensure we have time to get out and have a massive one on the town‘.
They had also been up the Radio City Tower but Greg’s fear of heights coupled with the high winds meant it wasn’t a memory he would cherish.
Fame hasn’t changed the trio with all three still with the girlfriends they had prior to getting signed up by Epic UK in 2007. Apparently, the other halves think their new-found success is ‘quite bemusing‘.
Greg’s greatest extravagance, he informed me, was ‘13 pairs of flares‘. Crazy. And those stick thin long legs had been finely honed during the band’s recent sponsored bike ride from London to Brighton.
Roy and Greg loved my revelation that Pete was a dead ringer for tennis legend Pete Sampras. Apparently that one might stick.
It was all going so well but then the cracks in my Scouting for Girls knowledge began to show.
Asked what I made of their second album, I lost my front, saying ‘To be honest, I still love the first one so much I hadn’t got around to the second one yet‘.
I tried to swiftly move on and asked the lads if during the gig they could dedicate Isn’t She Lovely, to my baby daughter Holly.
Cue strange looks all round and a nervous silence.
Natalie came to my rescue with ‘Yep, they could if they were Stevie Wonder.’ The penny finally dropped. Of course ‘She’s So Lovely‘.
Again, I tried to deflect attention from my faux pas by asking Pete what track they were releasing next, to which he responded ‘I’m Roy‘. I then asked Greg to which he replied ‘I’m Pete‘.
I blamed the students for spiking my pint. Thankfully, it was time for the lads to hit the stage.
My expectations were low but over the course of the next hour and a half I was blown away.
So at ease, the trio just looked like mates having a great time doing what they do best.
Okay, the lyrics are basic and repetitive. That was best summed up when I asked a devoted twenty something female with a SFG T-shirt next to me at the front what the current song was.
She replied: ‘Wait a moment.. it always takes me a while to work out which one it is.‘
But the fans lapped it up – right from the hoards of students to the middle aged couples.
The highlight of a performance bursting with energy was the anthemic ‘This Ain’t A Love Song‘ which gave them a first number one single.
It might not be for music connoisseurs but it is feelgood singalong pop at its very best.
They’ll be back and so will I. And next time I won’t have to pretend about being a fan.