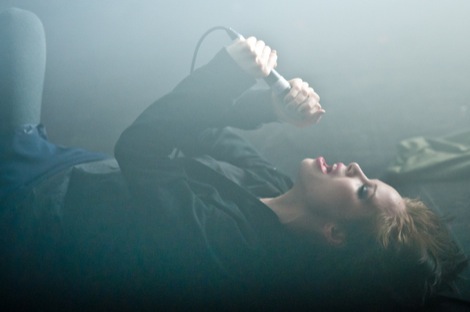 Kids love going the zoo. They also love going to see Crystal Castles.
The two share much in common – an experience of controlled basic instinctiveness where the watcher wonders at the unpredictable primal performance played out before them.
Central to their gratification is the feral ferocity of Alice Glass; part sleek panther stalking the stage with an untamable malevolence, part howling primate ready to inflict all manner of damage, it just depends on how close you stray to the cage.
Her foil is the brooding grizzly bear hulk, Ethan Kath, whose indifference to emerge from his hideaway hoodie is only matched by his cranial-crushing weaponry roar, which he unleashes at the flick of a couple of buttons and switches. 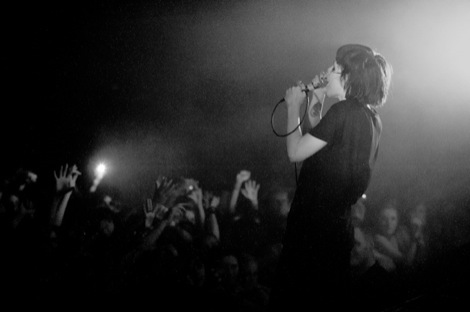 His best bombs land in three different forms. There’s the happy hardcore by way of witchhouse being peddled by band dejour Salem (see Baptism or Empathy), there’s the noise-disco of fan favourites Crimewave and Alice Practice which usually signal the arrival of Glass perching atop the security barrier open mouthed screaming inaudibly amid the sheet of blast, and finally there’s the sheer punk-drilled-battering-ram of beat-rippers (Doe Deer) which feel like they’re being channelled through your face, ariving in your belly to rip out your innards before tweaking your finger-tips just to check you’re still alive. 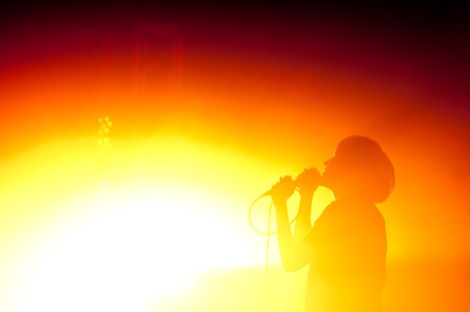 This is the fourth time Getintothis has seen Crystal Castles in all their live glory and it’s undoubtedly their most measured – using the term as loosely as possible – Alice still disappears intermittently, be it writhing on the floor like a skaghead with cramps or diving wrecklessly into a sea of outstretched arms reaching desperately for a touch of that milky white skin, she lashes a bottle of JD and a torrent of psychobabble to photographers stage right and sends high-rise cymbals crashing to the floor after beating them with her mic for an extended siren-screeching version of Intimate.
But this is no safari dash like their early days – or that Latitude display – were most gigs ended in trashed stages, bloodied lips and hysterical security staff calling an abrupt halt to proceedings a mere handful of tracks in. Nope, tonight is 90 minutes of pounding pandemonium, as thrilling as it is theatrical. Caged carnage at its chaotic best. 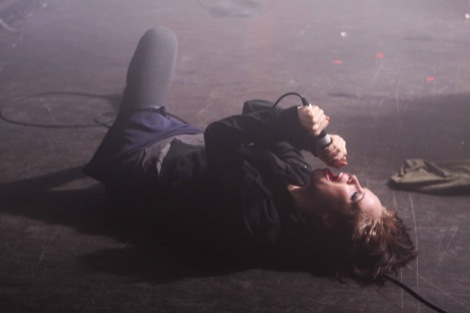 All pictures by Mark McNulty except final picture of Alice Glass by Conor McDonnell.
* Addendum: This excellent insight into a Crystal Castles gig appears on Mark McNulty’s blog, re-posted in editted form here as it expertly captures behind the scenes action:
“I’ve shot from the back or side of the stage at the O2 Academy on a few occasions and it’s always a hit or miss affair. The night that the O2 Academy opened I was onstage at the back of Shack’s stage to get a venue shot and I’ve also been on there with The Bunnymen and then with Kanye West and Estelle which was a bit too weird as I had to stand next to him on a podium and I got to use flash.
“No such luxuries last night though. All photographs had to be taken from behind a white line at the side of the stage as Crystal Castles singer Alice Glass uses the pit to access the audience. Nothing wrong with that. However, the white line faces a constantly pulsating bank of LEDs and superfast strobes which don’t quite light up the darkness and I spent three songs really not being able to see anything at all, never mind photograph anything.
“It was either pitch black or blinding strobes and the only time I could pick anything out in the darkness was when Alice lay down and we didn’t have to point straight into the lights. And then as a song ended and I’m trying to work out the dark shapes against the darkness, I realise Alice is stood in front of us shouting something before wandering off into the audience and then launching into a another song as six confused photographers get ready for another round of stroboscopic epilepsy tests.
“Needless to say that any form of traditional gig photography was out the window and the order of the day was mood. It was a good challenge and quite a surreal experience and although I wouldn’t swap my job for the world, I sort of wished I was out in the audience for once instead of working ‘cos it looked like they a lot more fun!”