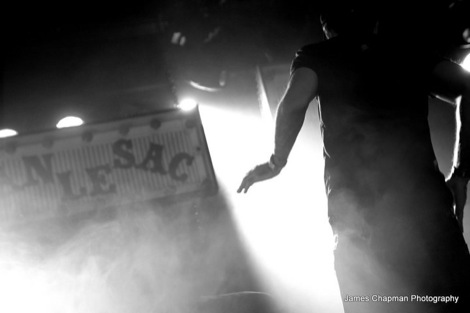 Nimble wordplay, speaker-shattering beats and the odd bit of stand-up as the Dan Le Sac v Scroobius Pip show rolls into town. Getintothis’ John Maher is only too happy to join in the delirium.

There’s a growling voice somewhere amid the darkness.
A familiar, recognisable voice – its southern drawl full of Essex curves and lost Ts. Gradually a figure comes into focus which is firstly just a reddish silhouette and secondly a full-blown person complete with mammoth beard. And then Scroobius Pip takes a huge swig straight from his bottle of rosÃÂ©.
‘How are ya doing Liverpool?‘ he booms, everyone cheering that they are doing ok, thanks for asking.
The poet and his music-maker colleague, Dan Le Sac, go in hard early on: shattering any perception that this would be Wordsworth and daffodils not delirium and dubstep.
Our attention spans are grasped within minutes when they pluck out Look for the Woman, the audience participation almost drowning out the actual music. Le Sac’s instrumentals have been beefed up here to satiate the hunger of the Academy’s wannabe ravers and at certain points it resembles a prog-corrupted freeform experiment. Cue slight yawning. Yet Pip evens matters out, often doing nimble spoken word pieces over quiet-ish ambient backdrops. 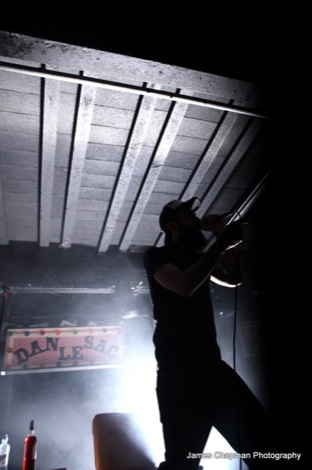 Throughout, both indulge in more-often-than-not funny banter, from the depressing content of their lyrics to Lady Gaga to how much money they spent on new, shiny name-signs that face us from the stage (which, coincidently, look like giant wedding cakes).
If the pop thing dies then I’m sure they could make few quid in stand-up. Only a Robbie Fowler reference gets a surprisingly mute response.
But, as it should be, the tunes prevail after all. Pip – real name David Peter Meads, not as snappy – gleefully takes on different characters during one scene and the kids are back sweatily jumping for Better.
It’s around this time that the duo praises their support for marvellous effort, so this review should as well.
Misty’s Big Adventure did what they usually do, not give a flying hoot. I remember trumpets dancing in the air and people dressed in crazy animal costumes and they are fond memories. 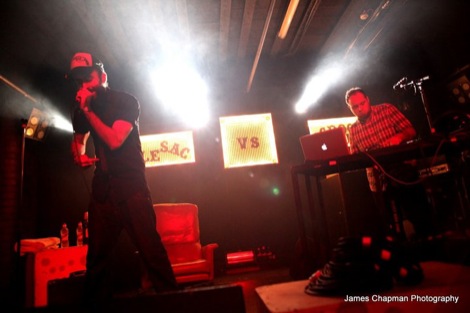 Tonight’s other support, singer Kid A, sounds sumptuous when she rejoins the stage on the angelic Cauliflower, and this before even those with just a passing interest must join in too.
Thou Shalt Always Kill, SPvDLS’s biggest hit, has been anticipated and its sentiments go down well, although that extra panache/something is missing. When the men reappear for the encore, though, doubt is cast aside.
Plastic Tuborg glasses are mainly spilt as The Beat That My Heart Skipped bounces into earshot. And, finally, the speakers slosh out fragmented grains of Radiohead‘s Planet Telex – the great backdrop to Letter from God to Man.
Scroobius embraces drama standing centrally looking down at the crowd; a preacher wearing a skinny red tie.
The night explodes via a blaze of mad, skittering drum and bass loops and yellow flashbulbs. I bet even Thom Yorke never expected to sound this mangled.
Pictures by James Chapman.