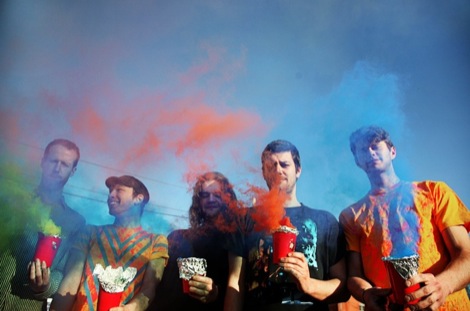 Fang Island: the high-fiving, double CAPS LOCK soundtrack to the best time of your life. 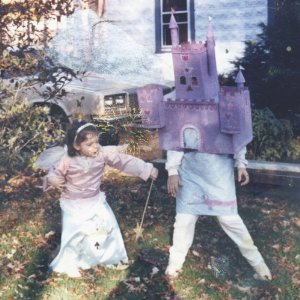 1. The ‘Journey’ Song: Little Jewish Mikey has been bullied from an early age. Since arriving in England he’s simply sought to fit in. This has never happened – until now.
He’s found fame and acceptance – he’s live every Saturday night on prime-time television singing songs which until recently, no-one but his grandparents (his mother and father died in a freak accident with an escapee elk from the nearby zoo back home in Oklahoma) and invisible friend Bobby listened to.
Now in front of an audience of millions, his hair-lip, exaggerated goofball laugh and handmedown attire are forgotten, as the insincere host reads out his name as the Search for a Star victor – the montage is played, the glitter rains down and Fang Island‘s anthem to end all anthems Sideswiper rips through the speakers in one loud, proud blast of WIN.

2. Party: No album in living memory has stood for party more than this. From Welcome Wagon‘s incessant one-riff rumble and gloriously high-roller climax to Life Coach‘s prog-rock duelling guitars and mania-inducing vocal rushes. This is the album to put on while you get ready, while you make dinner, while you party, when you get home and when you wake up again.
If everyday you want to feel like Andrew WK, then party til you puke with Fang Island. And then do it all over again.

3. The Waynes World/Bohemian Rhapsody Moment: Quite possibly the most repeated/famous ‘bros united’ sequence in comedy film history has been replayed to a lesser/greater degree by me and mates travelling to/from gigs all over the country as Fang Island belts out of a car speakers.
Whether it be mid-afternoon slogs down to Minehead for All Tomorrow’s Parties, a late night nip across the A59 back to the sticks of West Lancashire or recent trips across the motorways back from Manchester, the oooooohs, aaaaahs and euphoric waaaaaaaaaaaaaaaahs of Daisy and the swirling harmonics of Treeton‘s plain daft organ/choral combination have supplied endless fun and not to mention rapped dashboards, steering wheels and a plentiful banging of heads.


4. The Greatest Ever Hero’s Dying Scene: Pick your favourite actor – we’ll plump for Al Pacino as probably only big Al could lend the necessary melodrama.
Our hero has conquered an evil hitherto never known before, he’s saved his girl, the world and all future generations from certain destruction – but he couldn’t quite save himself.
Lying in a pool of crimson, Fang Island‘s Davey Crockett begins; 90 seconds of heavenly sparkle, followed by gentle boy-girl woos, ahhs and the delicate strum of a guitar. Then two minutes and 30 seconds in and our hero’s eyes flutter and close for a final time: Zeus’ angels emerge from the gates – a strident electric warhammer ZINGS a riff of Godly proportions and the spirit of saintly John Bonham bangs the drums for the Greatest Hero the Earth Ever Knew. After four minutes, the Lord’s apostles rise in unison to welcome him into their bounty, singing and clapping an anthem worthy of the King of Kings.

5. Dreams can come true: Pretty much everyone holds on to a special childhood film and it’s usually because we connected with the hopes and dreams of the central themes or character.
There’s an essence of those hopes and dreams that’s imbued within the opening and closing two tracks of Fang Island. Dorian and Dreams of Dreams seem to capture that wide-eyed innocence and sense of wonder – they glisten with magic and spirit.
There’s a naivity and a feeling of endless possibility – ‘they are all within my reach, they are free,’ the band sing as one on opener Dreams of Dreams – certainly this is a record which makes you believe the world isn’t just yours, but you can have it all.
9/10