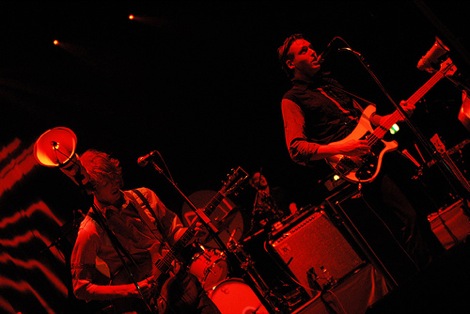 Manchester’s Grand Central is turned into the church of Arcade Fire – Getintothis’ Matt Eland is worshipping at their altar.

Manchester’s Grand Central is a strange venue but the ecclesiastical reverb makes it an appropriate one for Arcade Fire.
They’ve always been a massive band with massive songs but with the release of The Suburbs, they’ve got a hit-strewn set to prove it and, as evidenced by Win Butler tripping over his monitor and sitting sheepishly through a whole verse of We Used To Wait, the gawkiness required to stop any latent Bono tendencies.
Ready to Start (that programmed breakdown sounding huge in the disused railway station) and Month of May are a powerful opening salvo and most of the set is Suburbs-centric.
Laika is the first tune they pull from their back catalogue and there’s a tangible swell of affection in the room. Sadly theres only three tracks from Neon Bible; maybe the muted reaction to that record in the face of their debut has muted their option of it.
The first two songs of the encore are Keep the Car Running and Sprawl II, and people are already singing the choral refrain from Wake Up before the first staccato chords of that song are even played.
Once it kicks in, there’s a sea of raised hands from front to back, a sight that sums up the band’s appeal. Walking through reveals a diverse crowd.
They’re a band your Nan could listen to, and yet they still rock. They sell out huge venues without saccharine Christmas single balladry.
If there’s one downside it’s that the bass drones out in the big space and the venue isn’t entirely suited to such crowds in the way that the MEN is.
But these are songs for big spaces by a group that don’t look like losing their way.