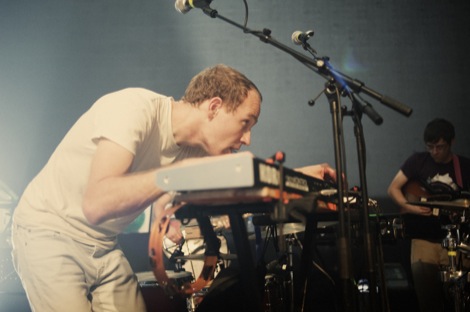 Kaleidoscopic magic for the festive period.

The Kazimier is PACKED. Like, you can barely move, packed. It’s also exuding a warm, festive sparkle – there’s twinkling white lights popping off branches and leaves sprouting from the rooftop beams – and before we begin, the whole evening crackles with a Christmassy glow.
It wouldn’t be over-emphasising the point that tonight feels like the culmination of another cracking year in Liverpool – for music, arts and the creative pond that’s swelling year on year.
All the heads are here, and Caribou main bro Daniel Snaith is clearly chuffed that his debut display in the city is being greeted with such a happening.
Happening we expect, and happening he provides. Though it starts rather suddenly; a whirring of electricity, a few dusty beats and chirps and Snaith’s fuzzy falsetto welcoming in Kaili‘s drone which catches half the place off guard – the bar still ten deep with bobble hats and beards.
We’re lucky, locating an empty speck on the balcony, perfectly positioned above the kaleidoscopic, cyclical backdrop – a birdseye view to watch shadows of guitarist, blitzing drummer and Snaith kerpowing amid shots of bright white light and psychedelic strobes.
The images perfectly reflect Caribou’s hazy textures and layered fizzing – at first we’re somewhat worried by the lack of audience appreciation but it’s a gradual build which begins with plenty of nodding heads, to shoulder jerks and knee-bends to a full on sea of movement.
Leave House is the moment that the buzz takes hold, all boiling kettle-whistle keys and a groove which seaps into your bones while Bowls‘ gives superlative percussionist Brad Weber the chance to provide an almighty racket.
The goods are well and truly delivered in stunning fashion on closers Odessa and Sun – the former greeted with huge cheers as lasses on the left threaten to implode with glee while the latter lives up to it’s name showering The Kazimier in a glaze of good vibes.
At the end there’s a feeling of still – at first leaving the cobbled streets of Wolstenholme Square I feel a thirst for more, somewhat lacking of satiation – it’s only later it registers as tranquility, a stillness and harmony of something quite special indeed.