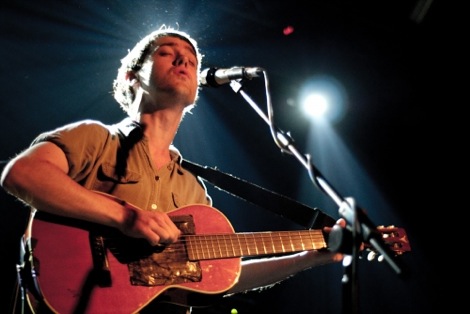 Conor O’Brien takes in a roudy Kazimier, and then takes it over. Getintothis‘ Alan O’Hare is among the village people.

Wuthering Heights author Emily Bronte was once described by her sister Charlotte as ‘stronger than a man and simpler than a child‘.
It’s a juxtaposition that’s hard to fathom really – unless you just get it, of course.
A bit like Conor O’Brien and Villagers.
Slipping from heart-stopping delicacy to back-spasm intensity, often within the same verse, Villagers have got it all going on.
Debut album Becoming A Jackal – played more or less in full last night – has caused a stir this year and found itself on the Mercury Prize shortlist, but this ain’t Gomez or Talvin Singh.
It’s way too important to be just another good first record.
Villagers’ have found a unique thread that is set to unravel and lead to untold greatness. Yes, that good.
The songs sound like everything you’ve ever heard before, but only this time you’re listening after having just emerged from underwater.
It sounds right… but a little bit left too. Always teetering and never soaring. In other words, you can trust it – but never take your eyes (or ears) away from it.
As a frontman, that’s an apt description of O’Brien too. His personality seems as kooky as his fringe. But he means it.
In a time when charisma is wrapped up in a weird outfit and sent out to jump up and down while singing someone else’s song, Irishman O’Brien can hold rooms in the palm of his hand. A noisy Kazimier can intimidate some artists, but not great ones. He took it all in and then took over.
Battering that little acoustic guitar of his – Elvis Costello may have a fight on his hands for the ‘little hands of concrete’ nickname he has acquired over the years – O’Brien leads his band from the front and they follow him all the way.
The drums and bass stay as simple as the songs, but with an understated beauty. An ethereal hum from the organ is given occasional colour from keyboard flourishes, while the electric guitar rages and cries at a muted volume, coming up for air when it needs too. Perfect.
And the songs? They’re from the top drawer. Really.
Bright Eyes? No. If they didn’t share a Christian name, that now oft-repeated comparison would never have shown up.
Leonard Cohen is in there, with the confessional tone; the lyrics have a Dylan-esque quality, but siphoned through a thousand years of Irish aching and the all-consuming ‘right now’ of It’s Too Late To Stop Now-era Van Morrison shows up too.
Throw in a dash of femininity with Joni Mitchell‘s best records getting their head above water and you’re onto a winner.
A bit like the couple of hundred of us who packed The Kazimier out last night. We’ll never see Villagers up this close and personal again.
Some people won’t mind that. But, for those of us who like our music in our face and delivered with a rip-roaring intensity, it’s shame that the intimacy which brings so much to a Villagers gig may be lost. We’ll keep faith, though.
As O’Brien is alive with something that lots of his contemporaries are not: the desire to never settle and get better all the time.
Each record will be a bigger fish in the sea. And, in years to come, anyone fishing downstream from Villagers, will be left with very slim pickings indeed. A triumph.