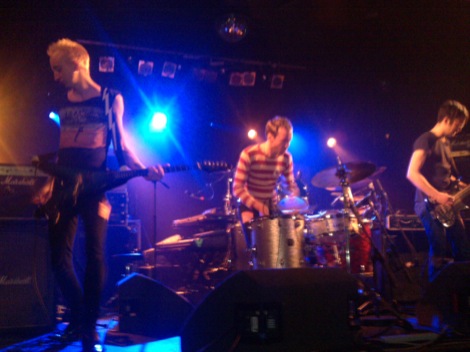 Teeth of the Sea – they’re a bit of all white. BOOOM TISH!

Every year it happens – the one that got away.
And 2010’s recipient of The Absolute Belter That Slipped Through The Net goes to Teeth of the Sea‘s Your Mercury – an album worthy of a top 10 finish in any end of year poll.
As is the case, it wasn’t to be, but tonight we’re making up for lost ground.
Yet, while we’re acquainted, albeit for the last two weeks, with their audacious, expansive sound, what we’re not prepped for is quite how visually arresting this rag-tag collective from the capital are.*
Take Jimmy Martin; part Sid Vicious, part bareback Berliner, the wiry lead guitarist looks like he exists on a diet of his boyfriend’s piss and the leftovers of a brown spoon, all the while pulling off a series of feisty matador clips of his cuban heels as spindly fingers serenade the neck of his beautiful Flying V.
Then there’s Mat Colegate, crash landing from Warhol’s Factory he stands stage centre, slightly hunched over three toms surveying the crowd and oozing malevolence, before delivering a series of measured thwacks to his kit.
The side comb-overs, distinctive body inks and unique facial hair sported by his remaining band-mates add up to a reet motley crew. 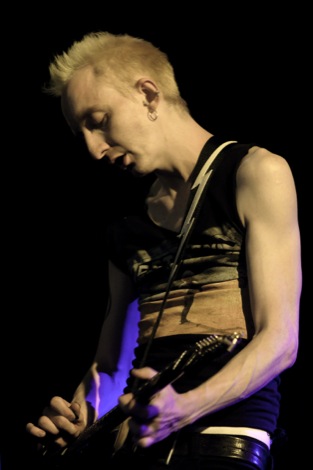 Everything though, begins with a slow woozy fuzz, chiefly originating from Martin’s effects pedals and the gurgling of Sam Barton‘s keys, a deceptive drone slowly building into relentless rhythms and orchestrated riffs usually from unexpected sources; an EBow, a trumpet or a stabbing Goblin-esque synth pad.
On Your Mercury Mike Bourne‘s trumpet drips with melancholy, entering like a high plains drifter straight out of a Sergio Leone western as Colegate dictates the pace with a slow tribal thump.
It’s seductive and eerie all in one before Martin adds a Budweiser-assisted slide with Robert Fripp-style gymnastics – the effect is devastating.
Better still is the labyrinthine epic The Ambassador, all hiss and feedback – Martin willing his amp to kick out monstrous ire everymore – before Bourne trades brass for bass as Colegate’s heavy patter recalls the wild flailing of Floyd‘s Set The Controls For The Heart Of The Sun.
Swear Blind The Alsatian’s Melting, (the sole contribution from their 2009 debut Orphaned By The Ocean), evokes more mariachi drone as heads nod in unison to the tide of perpetual forward motion. 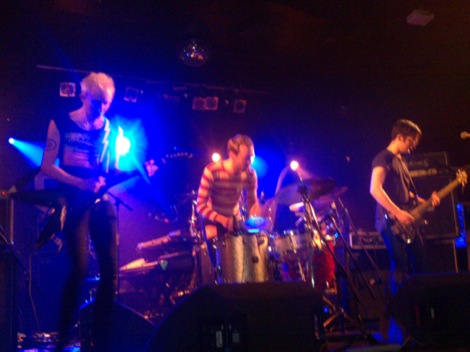 Opener A.C.R.O.N.Y.M. is the band at their most direct. Bourne’s thick, snaking bass line leads a merry dance around Martin’s screetching, lazer-like axe-work before Colegate hammers another tom and the whole shebang explodes into a heavy dose of primal krautrock.
If there’s a fault, it’s that the quartet are tonight’s hors d’Åuvre for a distinctly tepid British Sea Power, and with the sound set to the characteristic support slot default of ‘underwhelming’ it’s our hope that next time round this lot are given an airing they truly deserve, for on this evidence Teeth of the Sea are positively roaring.

Teeth of the Sea live at The Ritz, Manchester.
*While doing ‘research’ we were also not prepped to find Jamie Oliver is a big fan. Thus proving the point, you can still be a complete twat and like good music. 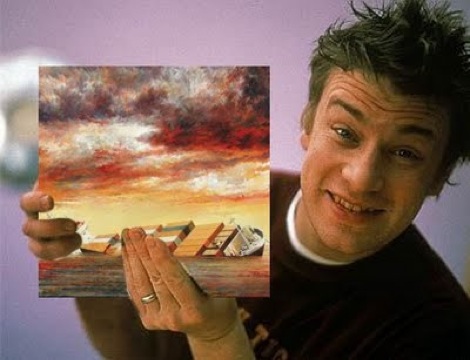