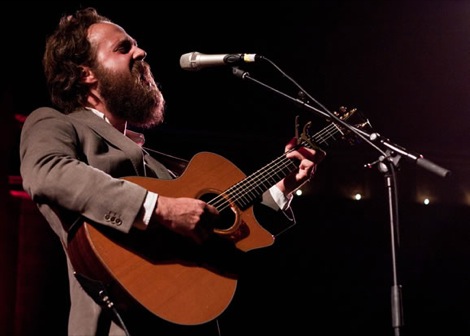 As Iron and Wine take the stage at the Philharmonic, you’d be forgiven to think the proposed cuts to the libraries had gone through, such is the preponderance of corduroy and beards.
It hardly hints at an exciting gig full of action-packed dynamics and therein lies the problem with Sam Beam – who is Iron and Wine – and his new direction.
Since the release of 2002’s The Creek Drank The Cradle debut, Beam has helped usher in a quiet revolution, which along with the likes of Fleet Foxes and Bon Iver, has reinvigorated the sound of folky Americana.
Beam’s early work was full of hushed intimacy and a hypnotic traditionalism that recalled the likes of The Band, but as each successive release has brought him closer to the mainstream, a professional polish has begun to touch his music, resulting in the Fleetwood Mac-esque slickness of this year’s Kiss Each Other Clean album.
This slow but decisive move to something more bland is reflected in tonight’s show which sees Beam meet the challenge of playing larger venues by multiplying the number of musicians on stage. As a result endless sax and flute solos drown out Beam’s quiet whisper of a voice which he admits is not at its best as the result of a cold.
Beam’s comment that “we like to play around with these songs and have fun” is an ominous one for fans of his simple, direct love songs and the likes of Boy With a Coin and Lion’s Mane are blighted by over-fussy arrangements.
Thankfully when he pares things down, Beam still has the power to entrance and many of his lovingly constructed couplets can sneak up and hit you between the eyes.
When given the chance to breathe, his voice combines beautifully with the lovely female backing vocals and on the fantastic encore of Naked As We Came we get a hint of what might have been as half of the band leave the stage leaving Beam to resurrect the intimacy that was sadly lacking from much of this disappointing gig.