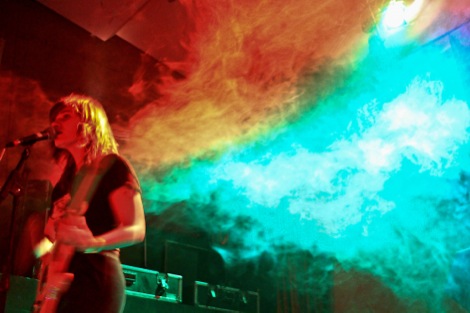 There’s a hint of summer knocking about to greet Best Coast at the Queens Social Club tonight.
Bare legs and sensible knitwear might not quite add up to the carefree, balmy ambience dreamed up by the Los Angeles surf pop protegees, but for an English spring, it’s not bad.
Less than a year after the release of debut Crazy For You, the venue is packed out with people waiting to find out how Best Coast’s breezy beach soundtrack will translate to the stage.
It translates a little haphazardly, at first. While the band’s arrival is met with delighted cheers and applause, their opening number sounds chaotic.
Singer Bethany Cosentino appears beaming and composed, but her vocals – usually disembodied and just out of reach – are flung mercilessly to the fore, guitars fuzzed out almost beyond recognition.
After exchanging a couple of horrified/amused glances, the band race on until the song’s close when Cosentino shouts across some instructions.
The Queens Social is a strange venue. It’s the sort of place designed for your mother’s schoolgirl anecdotes, a place where you could easily imagine people dancing to Tiger Feet over a shandy.
Notices about bingo are pinned to swathes of wood panelling, and there’s a definite parish hall feel to the place. It seems fitting that the sound would lack a bit of polish.
The only other band I ever saw here were the Dum Dum Girls, who looked as if they had got out at the wrong stop on the way to a funeral.
Bristling with ill-concealed annoyance, the singer crossly called out directions towards the sound booth at several points over the course of the night. Now, with Best Coast drowned out by a sea of unplanned noise, I start to see her point.
But technical mishaps fail to cast a shadow over the night, and a sea of noise is quite in keeping with the band’s wall-of-sound-inspired catalogue.
Dressed in high-waisted red pants and a midriff-skimming vest, Cosentino seems the picture of confidence and ease as she dominates the stage.
Maybe it was the gamine photographs, or the laboured cat iconography, or the wilfully demure lyrics filled with longing and helpless feminine regret, but I thought she would be blander than this.
While I’m not entirely sure what it was I expected her to bring to the stage – puffed sleeves and the offertory? – she gives off a persona that is less demure, more Selma Bouvier.
Throwing back her head with a cackle, she is full of repartee, asking the crowd if they are excited about the “royal I don’t give a shit wedding” and announcing that she has just been sick. She says the reason she has been sick is too disgusting to reveal except that it involves bandmate Bobb Bruno.
Despite cries of ‘Go on!‘ she maintains that we really don’t want to hear the details.
Later on in the evening she roars, ‘Okay, you guys! I’m PREGNANT! WITH BOBB’S BABY!‘ The announcement goes down like a lead balloon, with no members of the audience feeling themselves tutored in the appropriate response.
Still, a hasty return to the music puts the night back on track, the band’s sophomore material radiating as much sun-drenched appeal as their first album.
Something About The Summer – deciated to the sweatiness of the venue – is a highlight, less Sixties girl group, more grunge.
Likewise, Boyfriend, tonight a sly tribute to Kate Middleton, sounds a little more rough and ready than it does on record, which is no bad thing.
At one point Bethany puts down her guitar and tells Bobb to ‘give a speech, or something‘ before wandering off-stage for several minutes. When she arrives back, there’s a look of bewildered amusement on her face, as she admits, ‘I’ve never done that before, I just felt like an intermission‘. Once again, her charisma wins out and cheers abound.
Another highlight of the set is I Want To, perfectly showcasing everything Best Coast do, ah, best – lovelorn paean to absent male skewered down the middle with raggedy, riotous abandon.
There are splashes of beer exploding overhead like pungent fireworks, and girls dancing like crazy. The momentum carries right through to the end of the set, with former Vivian Girls drummer Ali Koehler nearly falling over herself to keep up, right through until the band clear the stage on a high – there’s no messing about with an encore.
It looks as though this will be another Best Coast summer.