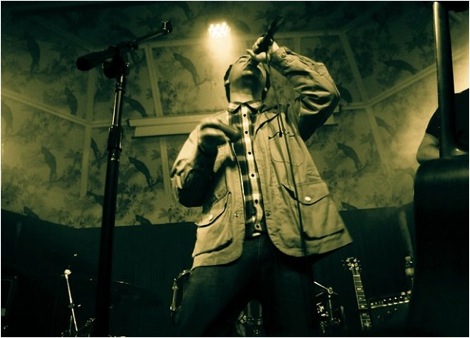 Heart and plenty of soul is the order of the day as Getintothis’ Jamie Bowman ejoys the passion play from Steve Mason and Liverpool’s The Sand Band.

Emotionally direct, but in your face passion, is the order of the evening from the former Beta Band leader Steve Mason whose move into heart-baring electro-soul has seen him find a wonderfully effective new voice both literally and metaphorically.
Where the Beta Band‘s pastoral muddle often confused and dragged, Mason’s new songs soar and punch their way into your consciousness, with a pop sensibility that’s been brought to the fore by Richard X‘s production.
Several key songs stand out: ‘Lost And Found‘s direct tackling of suicide contrasts directly with a melody so strong it was a single, while a euphoric ‘Boys Outside‘ brings Mason’s usual Scouse crowd of ageing scallies to a tearful climax.
A nostalgic but defiant version of Beta’s classic ‘Dr Baker‘ is followed by a brilliant closing version of Mason’s proto-baggy anthem ‘I Walk The Earth’ which makes you wish Ian Brown could still make sounds this good.
“The trouble with your own thing is you end up on your own” sings Mason on a version of his former band’s ‘Simple‘ but as tonight’s gig shows, Mason’s choice to go solo is a blessing for all.
A fine example of the rude health Merseyside’s music scene finds itself in arrived in the form of The Sand Band, who stripped down here to a three piece, produce a stunning set of melancholic sparseness.
Full of trans-Pennine influences from Doves to Shack, the news that Noel Gallagher has added singer and guitarist David McDonnell to his backing ground shows that at least the former Oasis man’s taste is intact.
Without drummer Jay Sharrock, the Sand Band’s wash of steel guitar and psychedelic atmospherics is allowed to gently envelope the appreciative audience and like all good groups they leave the stage leaving the crowd wondering if their hearts have been mended or broken.