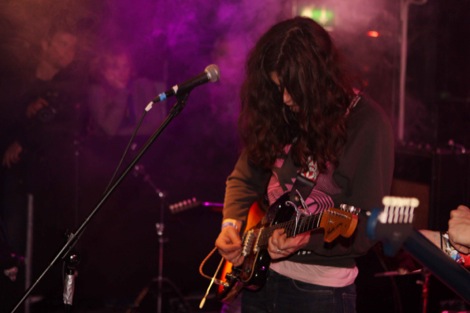 Getintothis hosts our own gig, sounds off as a key note speaker at the Conference and then dashes round for eight hours in the search of aural gold. Day Two of Liverpool Sound City proves busy but more than rewarding.

If Liverpool Sound City Day One eased us in gently before ripping a new hole. Day Two dispensed with the foreplay and proceeded straight into a hardcore session.
An eight hour dash round the city saw two churches spirited away, a mutiny in a ship, an art gallery besieged by beat driven loons, a near-riot at a theatre and a quietly-spoken Yank hide behind a mane only to destroy Merseyside’s most-hip of hang-outs.
It began where it finished: as The Kazimier saw Falmouth’s Tall Ships race through instrumental time-signatures while battling with muggy vocals – leaving a sense that there’s more to come from a fleet not quitre ready to sail full steam ahead.
A sprint up the hill to the Cathedral Crypt, and our ears are almost ripped from their ligatures as a feedback echo delivered from the palm of God himself pierces our mind. Oh, it’s Zeus… The band.
Like Fleetwood Mac minus the sniff of sex, they emit a holy racket and tee up a beautiful half an hour in the Lord’s presence as Rural Alberta Advantage plod, albeit nicely, along as we nurse our third round of the evening.
The night truly starts to sparkle as we hook up with Getintothis showcase night (funny that!) at The Bombed Out Church as rising city starlets Outfit are once again on sharp form.
It’s one thing to know your way round a melody and fancy time signatures but to blend the two together is an altogether different beast – this lot make it look effortless; with harmonies galore, the Hunt brothers rifling their guitar necks and forthcoming single Caught Between Two Islands* closing in funkaglorious style, it’s a text book display from a band just three gigs in. The Future’s Dapper.
Cults at Masque are merely hmmm, but a detour via The Shipping Forecast proves our wisest move of the evening as Sydney’s Cloud Control simply dazzle; four-way harmonies, BOOMING riffs, foxy keyboard flutters and climbing aboard the house fixtures culminate in a set in which you can see the whites of the eyes welling from those in attendance as frontman Alister Wright assures all they will sail into the Pool once again.
NEW GENRE: Cirrus Uncinus Maximus.
Anyhoo, it’s back to the Kazimier, as Pop Levi‘s tangerine satin shirt is sadly his best offering – all show and little substance as the glam posturing overshadows his true assets in a set which appears more indulgent than we’re used to. 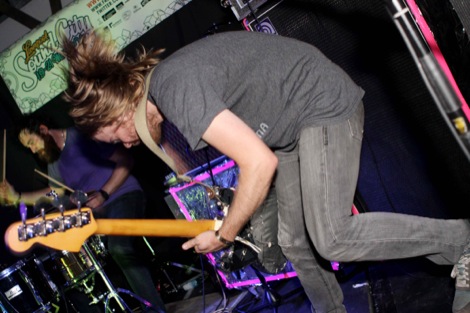 Colourmusic are the evening’s grizzly proposition; warlord finger salutes, axe-wielding super-riffs and boy is Static Gallery buzzing. The contrast as Kurt Vile and his Violators take to the stage in Kazimier is more than obvious; everyone’s reaching saturation point but the expectation carries them through – the finishing line and the treasures in sight.
And boy, is Vile a gem. Not much doing beneath that curtain on black, tussled hair but the effect is marvellous – whispered folky drawl and mountains of guitar – and a room ebbing under his gunsmoke rock and roll.
Three Trapped Tigers rounded off what was a special night for Sound City 2011 – a year when, on paper, there were valid questions raised about quality of bands, variety, new venues and new ways of working – all of which were unequivocably nailed today – Sound City is still the best boutique festival in the UK.
ps: Getintothis‘ first Liverpool Sound City key speaker session went well, too. John Robb hosted the blogger’s guide to new music and around 100 kids, musicians, hopefuls, experts and observers turned up as we chewed the fat while listening to new music from those in attendance. It was fun and in keeping with the rest of the day, left us wanting more.
Pictures courtesy of Conor McDonnell.