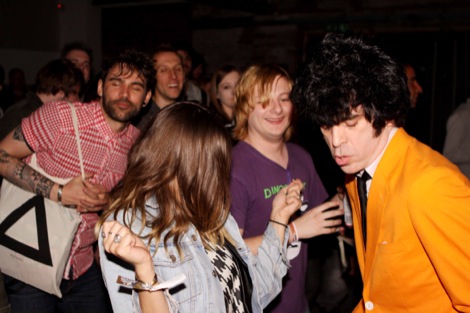 Jungle boogie, jailhouse rock and a new order of dance crashed landed during Day One of Liverpool Sound City 2011. Getintothis captures the veritable feast for the senses.

Like the craftiest snake lulling you in with a slow, rhythmic rattle, Day One of Liverpool Sound City began gently. But come 3am there was no doubt that, like King Louie, the party was in full swing.
And the thousands that took to the sunny streets of the Pool were left in no doubt as to who got the party started: Washington DC’s Ian Svenonius.
Sporting orange pimp gear, Chain and the Gang leader extraordinaire, led his merry band of jail birds – and one 70s kitsch lassie – through a swaggersome rock and roll stomp which turned Static Gallery from a zombie-laden nod to a full-on monster’s ball.
The legendary Nation of Ulysses frontman stole the evening, but he wasn’t the only one gettin his swag on; The Whip, erm, whipped up a storm inside the Kazimier which didn’t subside until 3am, Yuck’s swooning fuzz evoked air-punching a-go-go while Veronica Falls‘ clanging riffs reminded us of just how good they were back in Korova upstaging the Vivian Girls way back when.
But it wasn’t just the international contingent leading the charge; Liverpool’s Capac and The Temps were on equal footing in the must-not-miss stakes. Capac delighted The Kazimier crowd with hypnotic belly rumbles and a Kate Bush-inspired turn from Barbieshop‘s Kate on orchestral vocals plus arresting moves.
The Temps, meanwhile, once again brought the aggro – all These New Puritans wrath and a savy spikiness underscored by Joey Wainwright‘s bewitching, tigerish front.
Publicist proved that less is more as the one-man disco machine added layer upon layer of funk and electro in Static while Muto Leo added precision mathletics in the Zanzibar. Back at the Kazimier, Kaia‘s percussive patter and distinctive Norwegian vocal recalls Bat For Lashes duelling with Fever Ray.
Indifferent sets by Wolf Gang, The Kooks and Trophy Wife (just how long does one band need for a soundcheck!?) were forgotten once Delta Maid lay down her country charm inside the atmospheric Bombed Out Church recalling both the deep south and deepest Wavertree.
Check back tomorrow morning for all the round up from Day One, plus previews, gossip, and more. Over and out. 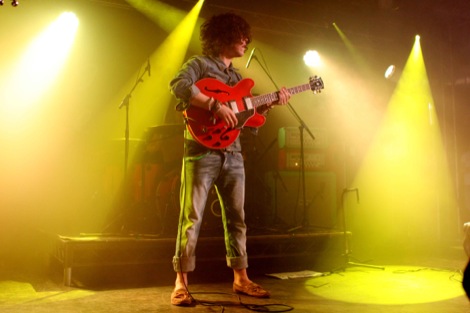 The View’s Kyle, at the O2 Academy, during Day One of Liverpool Sound City
Pictures courtesy of Conor McDonnell.