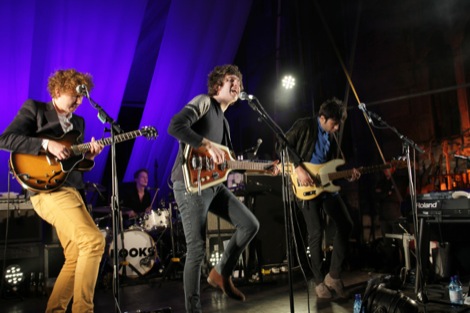 BAD DAY ALERT. The third coming of The Kooks proves five years too late. Getintothis’ Neil Jones finds their underwhelming dribble almost as painful as having his car stolen.

Picture the scene.
It’s 2006, and The Kooks are playing the Bombed Out Church in Liverpool.
Town is crawling. Police leave is cancelled, barbers are being inundated with curly perm requests, and the hottest ticket in town is a Kooks one.
Not too outrageous is it?
But that was then. That was five years ago. Back then, the Kooks were in. Their debut album Inside In/Inside Out was the soundtrack to most people’s summer, and their singles pranced around Radio 1 like the cream that floats on top of a bottle of piss.
I was one of those debut album disciples. Naive and She Moves In Her Own Way were pretty good, but it was the whole album which had me hooked. A Brighton twang can turn a boy’s head, especially in World Cup year. My bedroom rocked to Sofa Song, Eddie’s Gun and Jackie Big Tits, as I plotted my way through a June of Pro Evolution tributes.
So, six years on, how do Luke Pritchard and the boys measure up?
The answer is – not too well. Whilst II/IO was an album of poppy indie triumph, the years since have been none too kind. The band’s second album, Konk was….well, to put it mildly, awful. Even the standout tracks were poor. Nobody enjoyed it. Not even Luke.
So in the idyllic setting of the Bombed Out Church, hearing them belt out eight tracks from that flop was hardly ideal. Especially as my day had already been soiled by the fact that some bastards took it upon themselves to steal my car.
INTERLUDE/// INTERLUDE/// INTERLUDE 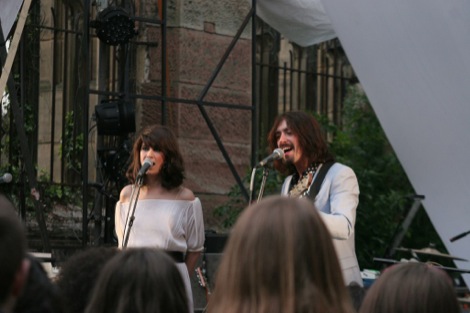 Here’s a lovely pic of Candie Payne‘s The Big House…
END OF INTERLUDE/// INTERLUDE/// INTERLUDE
With Sound City security locking folk out, despite the fact that there was space galore, and with some bellend deciding the best thing to do with a full bottle of Kopparberg was to launch it at our heads from 30 yards, it was an uneasy evening. The old ‘classics’ were on show, with Naive and SMIHOW going down a treat.
But despite admirable support from Ragz and the quite frankly beautiful and altogether more arresting-of-song, Delta Maid – I chatted up a barmaid later in the evening because she looked remotely like her… and got nowhere (‘I have a boyfriend‘ could yet be the soundtrack to my summer) – the slowed down Kooks were just too slow for most palates.
Their second album ‘hits’ were reeled off almost out of curiosity, whilst most wondered just how a band could go to selling out arenas nationwide to being placed below Pete and the Pirates on the Sound City billing.
It will be a long road back for Luke and the boys, if they have the stomach for it. Their first album showed they had the capacity for catchy, chart-friendly records. The trouble is, they seem to have blown their beans in the process.
Most bands that attract 200 to a Sound City gig will walk away pretty pleased. For the Kooks, it is merely a reminder of what can happen when you take your eye off the ball.
Pictures Craig McConkey of Brightscene Media and Dave Munn