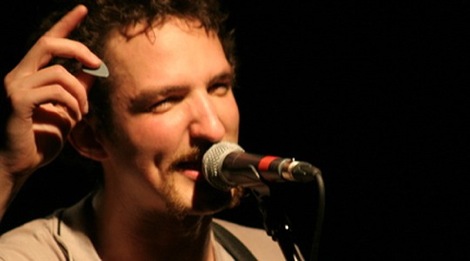 The turn-of-phrase master, Frank Turner, gives a sermon of the highest order in the Cathedral while Yuck, the Temps and Ghosting Season mightily impress. Less said about our friends from Norwich. Getintothis’ Mike Doherty legs it round town on Day One of Liverpool Sound City.

Have you ever played the Gran Turismo games? The soundtrack had some of the dullest, faux-energetic indie you will ever hear, and that is very much the summation of the Norwich band showcase at Mello Mello.
It’s far too easy to poke fun at Norwich, but with such bland, insipid music like what was on offer tonight, insulting the place is hardly difficult.
The Barlights are on a creative par with a bottle of milk, a sum-of-their-influences-and-nothing-more kind of band. Simply dreadful.
Much better however, are The Temps with their belligerent neo punk that shakes off the Norfolk hangover. Ghosting Season‘s sonorous pummelling of eardrums would have truly woken the Kazimier up if the glorious, definitive electronics of Capac hadn’t done the same just moments before.
Now bolstered up to a three piece and including live guitar samples, they are the apex of what Liverpool has to offer. On a hugely different note, Frank Turner at the Catholic Cathedral Crypt gave a master class in sing-along anthems that all local bands could learn from.
Appearing solo tonight, he sings with a tireless conviction and self-belief that has taken his brand of English folk around the world.
Long Live The Queen tells a heartbreaking but not mawkish story of a lost friend and To Take You Home is about a swift romance he had with a French girl; his song writing remains among the most articulate we have on offer today.
Back to the Kazimier, Trophy Wife sound like a band that even they don’t have belief in, peddling through their set list like a syphilitic old man flicking through a photo book of all the beautiful women he used to date, whereas Yuck provided the shoegazing uplift needed to end the night on a high; the pop brilliance of Get Away will win over any heartless bellend of a critic.