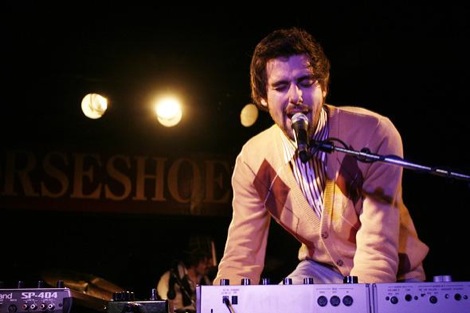 Smouldering folk and Nirvana with added hair products, Getintothis’ Orla Foster has a grand night on the tiles during Liverpool Sound City Day One. But it’s the Canadians who truly excel. Maybe rein in the benter, though.

My first taste of Liverpool Sound City takes place in Mojo, where I catch a couple of tracks from Wolf Gang, who give a masterclass in slick haircuts, confidence and Eno-flavoured pop.
Then it’s time to sidle along to the Shipping Forecast to see how the Canadian Blast showcase is getting on — arriving just in time for Vancouver’s Said The Whale.
They ‘re busy setting up for a while when the singer lurches forward to greet the audience, poised to play. Wait, he was just kidding!
“That’s Canadian humour,” he winces. This is soon followed by a further example: “What does a fish with no eyes sound like?” Quips aside, Said The Whale whiz through a brilliant set, rocketing everybody’s mood by about twenty notches. Everyone in the band is so animated you don’t know which part of the stage to look at. This is pop that wears its heart on its sleeve, and all the better for it.
Meanwhile Leaf is playing host to folk favourites Smoke Fairies, who look the picture of demure. Their music is nicely offset by the interior, its high ceilings and decorative arches slotting in well with the air of pageantry and solemnity which characterises their elegiac, slightly forlorn back-catalogue.
Across the road in the Masque, Dinosaur Pile-Up are going down a storm. Nobody in the room is wearing a Kurt Cobain hoody, but you sense that if they were, it would be okay.
The room isn’t rammed enough for a mosh pit to happen naturally, but the reception is pretty encouraging, with new songs going down as well as old favourites like My Rock N Roll. Feet are stamping, arms are flailing. It’s like Nirvana with hair products, but I suspect I’m not the first to say so.
To finish, it’s a return to the Canadian Blast stage, where Winter Gloves are in full flow.
Three members of the band have a keyboard in close proximity, which is a always a fairly good indicator you’re going to be blown away by some power pop, which I couldn’t be happier about.
Likewise, the drummer looks so animated his cymbals could split. I think I’ll be trailing some of these Canadian acts for a repeat performance.