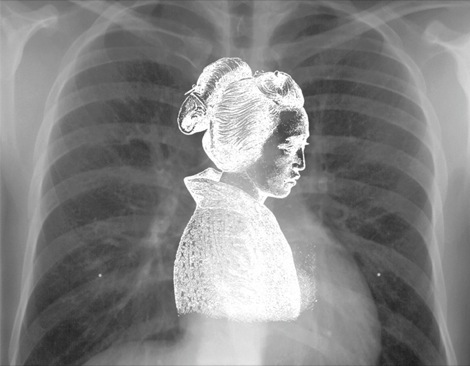 Forest Swords makes his anticipated ‘return’ with a specially commissioned event as part of AND Festival 2011 at Static Gallery on Thursday September 29. Ahead of the evening, Getintothis’ Peter Guy chats to Swords bro Matt Barnes about x-ray records, childhood memories and that long-awaited first album.

Getintothis: Hey Matt, how’s tricks? Give us an insight into the inspiration behind Ground Rhythms and your collaboration with Mercy?
Matt Barnes: I was commissioned by Mercy back in July to take part in this year’s AND Festival, and pitched the idea of Ground Rhythms to them.
I’ve always been interested in the idea of auto-destruction and it fitted with their theme which looks at space, energy and those kind of residual memories.
The three tracks are based on the David Lewis Theatre, Overhead Railway and the Sailor’s Home, none of which exist anymore.
Andrew Ellis from Samizdat is sorting the technical aspects of the installation for me, including pressing the music to X-Ray
film, and working with both teams has been great.
I tend to turn down a lot of things but doing this particular project appealed to me because everyone’s been on the same page. It’s not something I would have ever attempted on my own.
In terms of the inspiration behind it, we looked at things like Russian magnitizdat – where people used to home-duplicate and distribute recordings when music was banned – and Jacques Derrida, who worked with the concept of hauntology and the future’s relation to the past. It’s been pretty eye-opening and educational for me.

Getintothis: You say the piece explores the consumption of music, would you say it’s fair to suggest we’re feasting rather than savouring music these days?
Matt Barnes: We all are, but I’m as guilty as anyone. I think when a band’s entire discography is available in an instant through iTunes, Spotify, or Google it’s difficult to take a moment and absorb what you’re listening to sometimes.
The turnover of bands and tracks to sift through is just ridiculous, and people’s attention spans are getting shorter. I know mine is. The installation isn’t finger-wagging, though, more of an experiment to see how people understand it individually.
In an age where everything’s archived and documented I’m interested to put recordings out there that dissipate instantly.
It asks something of the audience consuming the music but for me making it too – how do I deal with something that will be heard once, in an interesting context, as opposed to a record that will be heard over and over again.
It’s a different approach to performing something live. It’s been pretty crazy getting my head around it.
Getintothis: The piece is also about memory, tell us about your earliest memory and something you’ll never forget.
Matt Barnes: My earliest memory is playing blow football with my grandad – the game where you blow a ping pong ball across a table with a straw – and him blowing so hard one of his false teeth fell out. I think I was about five or six. Equally one I’ll never forget.
Getintothis: This is of course a one-off event, but what’s next for Forest Swords, > when can we hear new music and what can we expect?
Matt Barnes: First album is in progress and will be out once I’ve decided on a label. I’ve got some interesting plans for it. Also a couple of collaborations with a US artist due in spring and some other projects cooking.
Getintothis: Finally, what tips from 2011 – music, culture, where to eat?
Matt Barnes: Music, I’d say Sun Araw‘s Ancient Romans album is an intense journey.
To eat, I spend most of my money in the Mayflower on Duke Street. Culture-wise I’d recommend the Walker Gallery is peaceful, free and underrated.