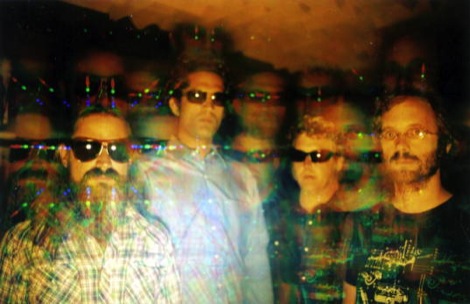 My oh my, have we waited for a gig like this…
The last time we saw Wooden Shjips was around 2am frazzled out of our skull in Minehead. At Butlins. The only thing we remember – it was loud and tasty.
So when the Harvest Sun cats told us back in Spring that they were bringing the psychedelic San Francisco spacecats over to The Kazimier, we were always getting involved.
Fresh off the back of the release of their kinda summery, kinda more structured but always fuzzy new album West, Wooden Shjips are ones not to pass up.

There’s also quite marvellous support in the shape of San Fran’s psyche-pop specialists The Fresh & Onlys and Getintothis‘ favourite Liverpool spacerockers Mugstar – who may or may not preview new material we told you about earlier today.
Harvest Sun‘s resident DJ bro Bernie Connor‘s also spinning tunes to keep jibber jabber to a minimum in between.
So, now that we’ve established that this is shaping up to be one of the gigs of 2011, here’s your chance to win a pair of guest list passes.
Just add Getintothis on Twitter and answer the following question and add hash tag #woodenshjips.
Q) What was the name of Lord Nelson‘s flagshjip at the Battle of Trafalgar in 1805?
a) HMS Victory
b) HMS Defeat
c) HMS Score Draw
d) The Yellow Submarine
Here’s some details: Harvest Sun Promotions proudly present:
WOODEN SHJIPS
THE FRESH & ONLYS
MUGSTAR
DJ BERNIE CONNOR
——————————————————-
8pm, Tuesday September 6 at The Kazimier
Tickets £10 from:
In person from: http://www.probe-records.com/