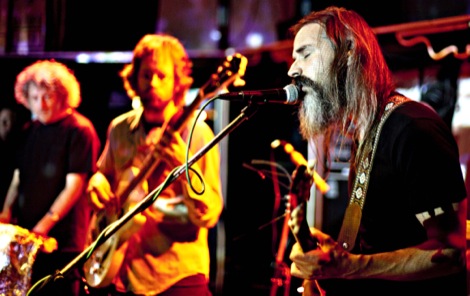 Getintothis rides on a wave of oblivion with Wooden Shjips at The Kazimier.

Followers of Getintothis’ twitter will be somewhat versed in the chronicles of our knee injury woe.
Late last year, in an attempt to shed some of the excess that naturally comes with over two decades on the gig circuit, we took to a 5-a-side pitch in Anfield for the first time in, well, two decades.
With the Lionel Messi-like skills dwindled to what one colleague proportionately referred to as Jay Spearing-like, we took solace in the physicality (kicking colleagues), socialising (swearing at colleagues) and fun (watching colleagues fall over) elements of the kickabout.
That was until a grim November afternoon, when Getintothis scored a 25-yard screamer (a complete one-off). The result of which was knackered ligaments and torn cartilage. A split second of ill-advised celebration was followed by 35 minutes in goal, months of agony, three MRI scans and much hobbling like a pirate while being repeatedly mistaken for a Slater Street drunk.
Finally, post arthroscopy we find ourselves jacked up on codeine and diclofenac in a make-shift disabled zone* on The Kazimier‘s balcony.
It seems particularly apt, given that many of the folk present also seem jacked up on something. They, however, are swaying unsteadily as Mugstar‘s sledgehammer of space love causes their wispy beards to sizzle amid Sam Wiehl‘s frenetic light show.
Specks of light ping off denim jackets and trucker caps, and watching from behind Sam’s Macbook it’s fascinating to see how the coordinated theatrics off stage work so well with that emanating on it.
Rough calculations suggest this is the 37th time Getintothis has watched Mugstar in around a six month period, yet their cohesion, power and intensity is unequivocally better than ever.
Black Fountain is so loud our left eye starts watering while closer Radar King breaks the 12 minute barrier, marking a 30 minute mini marathon that few bands, on this kind of form, can only hope to match.
Pity then, The Fresh & Onlys, who follow. Like four soggy uncles who’ve spent far too long mooching around car boot sales, the only arresting characteristic the San Francisco outfit can muster during the next 40 minutes is Wymond Mile‘s quite preposterous haircut. It is remarkably daft.
Shame then, that their music fails to inject any ounce of entertainment in one of the most bland sets in recent memory.
Trudging US alt-rock with barely a jot of spirit, invention or soul, we find ourselves asked by seven different people whether we’d like to accompany them outside for a smoke. Sadly, our immobility and the lifeless sludge oozing from the speakers seems to sap any life from within us as we rooted to the spot like a hapless fool. 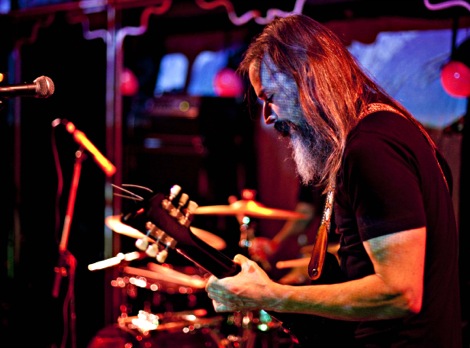 Thankfully, like the Krypton Factor assault course, the satisfaction of survival and the subsequent prize of Wooden Shjips makes for a sweeter finale.
Ripley Johnson, aka the real life Big Lebowski, seems to float into position stage right, before minimal instruction sees the place transform into a late 70s freakout as guitars crackle and spit in all directions.
While my drugs are having the desired effect to numb all feeling down my left side, it’s clear that virtually everyone else is enjoying something far more stimulating as the glistening lightshow reveals a Kazimier crowd swirling in unison.
Cyclical organ cuts through We Ask You To Ride and the Suicide kraut-pop of Fallin‘ while supercharger Lazy Bones‘ showcases new album West‘s summer fug. If we’re being churlish, it’d be great to hear some of the variety which Johnson weaves into his side project Moon Duo, as the more rhythmical elements bring a whole lot more party to the proceedings. But to be fair being static in the Kazimier‘s crow’s nest is part of the problem as those below show little sign of waning interest.
By the time the Neu-like drone of Down By The Sea‘s 12 minute odyssey comes to a close we realise almost 90 minutes have elapsed inside this vortex. And that’s Wooden Shjips in a nutshell – there’s little to distinguish where it all starts or when it will end but you simply can’t help but love getting lost inside their waves of oblivion. 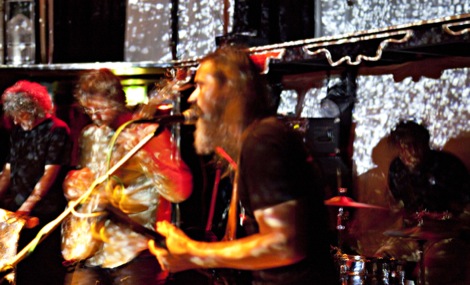 Pictures Jennifer Pellegrini.
* Much credit to the Harvest Sun bros for the disabled hangout. Hopefully it will be a one-off experience.