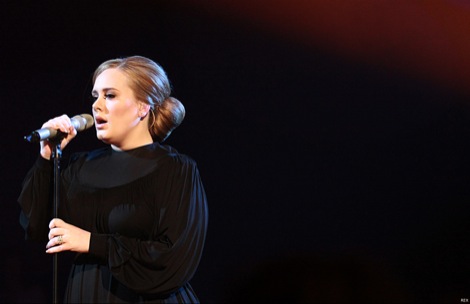 She may have knocked back a spot at Macca’s LIPA, but Adele seems to be doing just fine. Dave Prentice joins the North London girl for a chinwag.

It’s the song that celebrates coming to terms with a broken heart, a bitter sweet piano ballad that resonated around the world.
And it was inspired by Liverpool! Yes really.
The multi-million selling Someone Like You was composed because Adele didn’t want to go to Paul McCartney‘s LIPA. And that’s straight from Adele’s own mouth.
A cockney counter to I Don’t Want To Go To Chelsea, if you like.
We learn this because Adele doesn’t just sing during her stunning show, she talks. In fact she has a good old chinwag. Mug in hand, shoes kicked off and in front of a backdrop full of lampshades we could be sharing her living room… except for that astonishing voice.
Manchester’s marvellous Apollo Theatre lends itself perfectly to such an intimate approach.
Adele tells us she was due to study at LIPA, her mum wanted her to go, she didn’t (I thought I’d miss HIM too much) so she penned Someone Like You as a sort of protest song. And what a protest song.
Her songs are towering, tortured, heart-rendingly delivered from that astonishing voice, then before you can get all maudlin she cuts through the angst with over the back fence humour.
‘Where’s Joy from the support act?‘ (The excellent Civil Wars) she cries. ‘I’m gonna embarrass her now.‘
She then proceeds to explain how the American singer tried to match her drink for drink after a gig in Boston, and was wheelchaired out of the bar.
It’s this knockabout banter which stops Adele’s show becoming tragic, given so many of her songs deal with loss and heartbreak.
‘I wrote Turning Tables in a Dim Sum restaurant in New York,’ she explains. ‘You know those tables that turn round so you can eat a bit of everything,’ puncturing any pathos the song might engender.
Because when Adele opens her mouth to sing, her delivery is poignant, heartfelt and marvellously moving. And she has a packed venue hanging off her every word, except when they join in for a rousing crescendo of Rolling In The Deep.
Adele pays tribute to a number of artists on the night. The Steel Drivers‘ If It Hadn’t Been For Love, The Cure‘s Lovesong and Bonnie Raitt‘s I Can’t Make You Love Me are all beautifully covered.
The connection’s not hard to spot, and Adele laughs: ‘A lot of my songs are slow, so if you want to dance you can get up to these two!‘
The crowd doesn’t need to dance to enjoy this wonderfully talented artist, though. We’ve all been to the places Adele explores in song, but she has the guts to sing to the world about it.
And she does so powerfully and beautifully. An excellent show from an outstanding artist.
Just think how much better she’d be if she’d actually come and studied at Macca’s gaff in Liverpool.