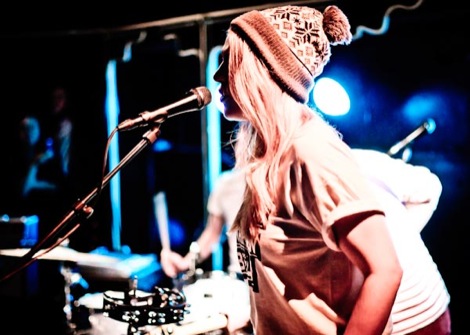 They were the reluctant darlings of UK anti-folk, and for a while it seemed like butter wouldn’t melt in their mouths.
But now, with sophomore album Paradise, Slow Club have broken the mould and challenged themselves to a more ambitious, dynamic musical direction. That’s what I heard anyway. So this evening I’ve come along to The Kazimier to find out if it’s true.
Local favourites Stealing Sheep are first on, a beguiling trio whose witchy harmonies and roof-raising psychedelia set them apart from other folk acts in the city.
Their easy enjoyment of their own performance, shown in the way they trade smiles and laughter all the way through their set, makes them a pleasure to watch – even from the grubby floor of the Kazimier, where many of their devotees have chosen to gaze up at them this evening.
Next up is Sweet Baboo, a folk singer from North Wales better known to his parents as Stephen Black.
He gives a strong performance – a cheerful strum-a-thon with plenty of character – but the lyrics are a little too arch, a little too self-demeaning, to ring quite true.
Then, when Slow Club take to the stage at last, they are almost drowned out by cheers.
They’ve always enjoyed a lot of popularity in Liverpool, and it’s clear people are glad to have them knocking about the place again, even if it does mean listening patiently through a roster of less familiar material – for the first part of their set, the band mostly play songs from the new record.
But with producer Luke Smith at the helm, their sound has shifted considerably: no longer purveyors of the perfect acoustic ditty, Slow Club have taken on a powerful, percussion-driven new sound.
For last week’s Sheffield date, I’m told Rebecca wore a dress stitched together from a Sheffield United kit. Tonight, she is decked out in a t-shirt bearing the slogan ‘Rotherham Is The New Berlin‘.
You spot lots of these around South Yorkshire, a defiant riposte to Rotherham’s usual fate of being swallowed up by its larger neighbour. And with Slow Club often bracketed as a Sheffield band, it’s nice to see them reclaiming their own turf. It’s nice to see them at all, really; they sound great, they look great. The crowd is noisy, happy, excited.
And then a terrible thing happens. Out of nowhere, a furious hiss slices through the air, stopping the revellers dead in their tracks. ‘Sssssssssssssssshhhhhhhhh!‘ At first I think I must have dreamt it, but there’s more. Speckled through the crowd, dedicated Slow Club admirers are hissing with all the ferocity they can muster.
This makes everything uncomfortable for a while. I’m stood there rigid, eyes gummed to the stage, ears straining to lap up every note. If I slurp my Bishop’s Finger a fraction too loud, then I’m for it, and there’s no way I’m going to utter another word.
All the same, if Slow Club ever doubted their credentials as a folk band, this will put their minds at rest. Once your punters turn into a pack of angry librarians, that’s when you know you’ve earned your folk stripes. Time to branch out into grime.
After the shushing dies down, however, things start to feel fun again. Rebecca is belting out the high notes like a talent show hopeful, with Charles looking cool as a cucumber at her side.
The highlight of the night arrives quite unexpectedly when the gaze of the crowd is drawn up to a balcony where Sweet Baboo, illuminated by a vast spotlight, is playing a sax solo like his life depends upon it. The man whose earlier performance was met with mildly appreciative nods is now being hailed a hero, swept up in thunderous applause.
Moments later, his slumped silhouette is visible at the stairs towards the side of the stage. This time he is clasping a can and looking like his wife just left him for the newspaper boy. Intentional or not, it’s theatrical twists like this that make The Kazimier such an entertaining venue to be in.
Towards the end of the set, both the drummer and Sweet Baboo slope off stage and it’s left to Charles and Rebecca to continue as a two-piece – which is what they do best. Even with half the musicians out of the picture, the sound doesn’t suffer one bit, Rebecca’s impressive vocal range and the pair’s tight interplay keeping everyone transfixed. Or frozen in fear of being hushed.
So, the new, more forceful sound is a revelation, and should go a long way in shaking off the twee mantle which Slow Club have cultivated over the years. There’s no doubt about it, the duo before us don’t seem as irrepressibly chirpy as the duo who brought us Me And You or super-sappy Because We’re Dead five years ago. Instead, they seem more brooding and aloof, with lyrics exploring complex themes such as ‘death and shagging,’ as Rebecca memorably puts it. 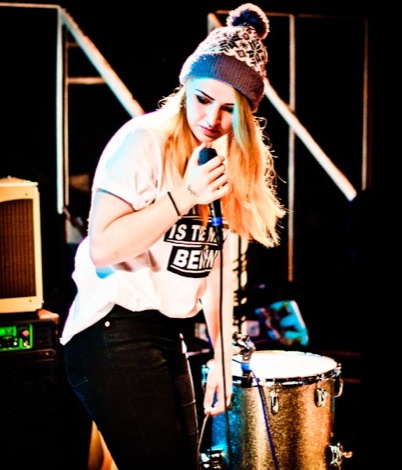 This is helpfully illustrated by the video for recent track Where I’m Waking. Rather than a roller-skating cherub with pianos in her fringe, Rebecca comes across as a deadly femme fatale, smouldering across the screen looking like the kind of person who’d pop a child’s balloon out of spite.
The evening closes with a rendition of Two Cousins, their rousing summer release. Lyrics such as ‘Hold on to where you’re from, It’s where your heart goes when you’re done‘ sound all the more winning when they’re sung in a Rotherham t-shirt.
After the show, free gig posters are set aside on a table for anyone who wants one. People mill around Wolstenholme Square talking about what a great time they had, and there’s an overspill of stragglers from a DIY punk gig across the road, as well as a crowd headed for the Oxjam gig at Mello Mello. The convivial atmosphere provides a perfect end to the show, and I get in conversation with a Rotherham expat who wouldn’t have missed tonight for the world.
So, maybe Rebecca didn’t perform her party trick of whacking chairs in place of a drum kit, and maybe you won’t be able to trill their new material round a campfire – but better than that, Paradise has proved that Slow Club have evolved and managed to keep their sound interesting. It’s good to have them back.