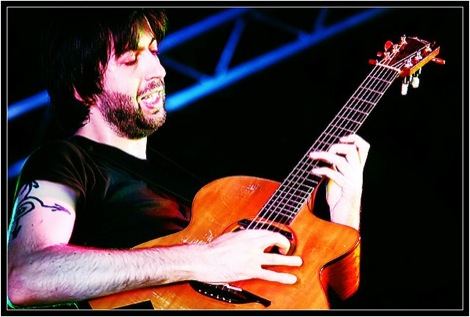 ‘Are there any guitarists in here?‘ asked Jon Gomm halfway through his set.
‘I’ve just given up,’ came the instant reply from a man in the audience.
He was probably being serious. High above the hen nights and hedonism of Mathew Street on Friday evening, Gomm was putting on a musical masterclass at the View Two Gallery, redefining what is possible with six strings and a wooden frame.
It’s almost unfair the things he can do on a guitar. Take his opener Passion Flower. Rumbling into focus with a series of thunderous strums, slaps and scratches filled in by emotive legato lines, Jon proceeds to tap harmonics, detune and retune for melodic effect and drum every inch of his instrument’s body, while laying down some Justin Vernon-style falsetto flourishes.
Everything swells, retreats, and then fades out just as it came in.

That’s the first six minutes of his set covered. The standard didn’t slip and not one jaw left the floor for the next hour.
Every unique and intricate tune seemed to have a similarly bespoke backstory.
An incredible instrumental take on Chaka Khan‘s Ain’t Nobody was made to order when a woman of a certain age asked Jon for something she could dance to. He returned to the same venue next time armed and ready.
Waterfall, inspired by Hindu goddess of music Saraswati and with a verse sung in Urdu (‘do feel free to join in‘), was built on cascading
torrents of percussion and haunting vocals.
Just as mystifying as his prodigious ability is an explanation for why Gomm is not much, much bigger.
Perhaps there is a danger with someone as technically proficient as Jon that he will remain a ‘guitarists’ guitarist’ revered for his chops but lacking the crossover appeal for radio play and TV time.
With almost half a million hits on Youtube and counting, Passion Flower could change that and give the Blackpool virtuoso the break he needs to cement his status as a northern Newton Faulkner.
Supporting Jon on a varied and impressive Liverpool Acoustic Live bill were local gypsy jazz duo The Manouchetones, riffing effortlessly on
several Django Reinhardt numbers with warmth and wit, and Nadine Carina, whose dreamy Swiss folk-pop was at times vulnerable and at others playful but always accomplished.