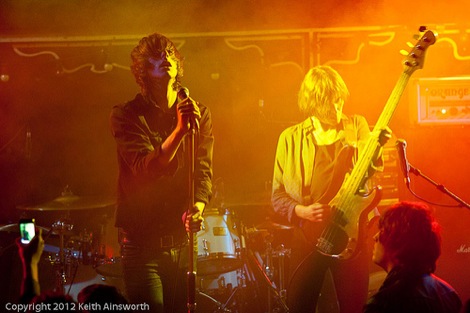 Handbags at The Horrors! It takes a stinging right hook to wake up this lifeless dirge.

It says much for a gig that it takes a punch up down the front row to provide much-needed drama.
But that’s exactly what was required to wake-up an anesthetized Kazimier, pummelled into the realms of indifference by 60-minutes of Horrors-induced boredom.
The incident in question arose during a flat Three Decades when Horrors chief Faris Badwan took out a seven-foot Ed Sheeran lookalike with a swinging right hook.
Whether Badwan’s cracker was in tribute to birthday boy Mohammed Ali has yet to be confirmed, but it came hardly as a surprise given the antics of the fan who prior to his clobbering, drunkenly swung a scarf inches from the band’s faces while mimicking that of a Kathy Bates super-groupie.
What followed was as unseemly as it was unnecessary, as a small throng took Badwan’s actions as a catalyst to kick seven-shades of shite out of the unfortunate fool before he was dragged from the crowd by a ‘helpful’ bouncer. 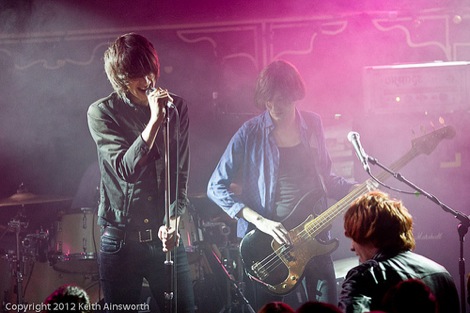 It seems sad to admit it, but the violence then provoked a fiery Moving Further Away as the crowd went batshit leaving Faris to exit the stage with the words ‘What took you so long?‘
Well, the answer is simple, quite mediocre music.
There’s simply no questioning The Horrors‘ delectable record collection, nor their take on their influences as Stooges-flecked garage, kraut Can-like drone, MBV noise and soaring 80s-goth balladeering were all given an airing but on a frosty Tuesday evening they failed to warm the cockles.
Openers Changing The Rain and Who Can Say barely register they’re so timid and despite guitarist Joshua Hayward‘s best efforts, throttling his guitar within an inch of it’s fretboard, I Can See Through You comes off little better.
Endless Blue fares better, like the Manics’ Revol, with a supercharged solo, it fizzes neatly into set highlight – a stunning rendition of Sea Within A Sea as keyboardist Tom Cowan combines with Rhys Webb‘s bass and Joseph Spurgeon‘s drums to thrilling effect with eight minutes of fractured drone.
But then it’s back to a stilted Still Life before they trot upstairs to cool off. What follows is pure pantomime but few people are laughing after this comedy of errors. 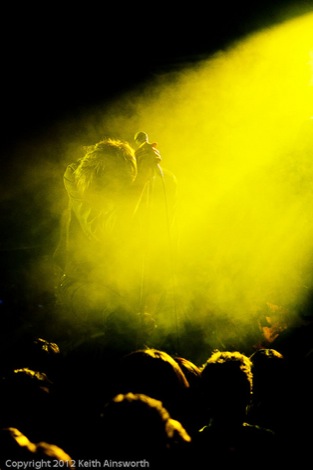 The Horrors setlist:
Changing The Rain
Who Can Say
I Can See Through You
Scarlet Fields
Dive In
Endless Blue
Sea Within A Sea
Still Life
Mirror’s Image
Three Decades
Moving Further Away
Pictures courtesy of Keith Ainsworth.