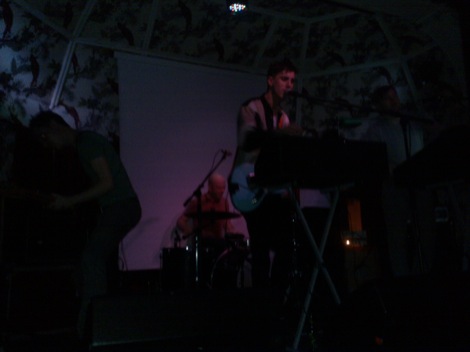 It’s a sign of where Outfit are at that guestlists are ring-fenced several days in advance of their high-anticipated sell-out return to the North West.
Hours before showtime, Manchester prog-pop darlings Egyptian Hip Hop are knocked back in their request for a chance to witness Liverpool’s bright young things and hours later contemporaries Everything Everything are hailing them ‘the best new band they’ve seen in ages’.
That they’re supporting one of Domino Records‘ finest, is barely here nor there, you get the impression that much of the crowd at the Deaf Institute are gathered to feast on the much-celebrated entrée as much as they are the main course.
And boy do, Outfit deliver. In keeping with their characteristic tact, they pace themselves with the measured concrete groove that is Vehicles (surely the first pop nugget to utilise the rhyming triplet of ‘alone’/’velodrome’/’answerphone’) before changing pitch as Thomas Gorton and Andrew Hunt layer duelling harmonies on Every Night I Dress Up As You.
Hard on their heels, comes new single Dashing In Passing strutting it’s stuff; a hard-balling funk which showcases Nick Hunt‘s art in the less is more approach to guitar trickery.
Later Hunt will barely play a note, allowing feedback and dense echo to do the work during several minutes of mystical six-string mastery.

Proceedings are ramped up a further notch with a brace of newies; Everything All The Time sees Gorton layer bleeps and brass-like synth amid Hunt’s maraca shakes, arched-eyebrows and soul-searching howl all the while Chris Hutchinson – marooned against his amp back right – swaps knowing winks with knuckle-dusting bass bombs – before Wisdom Teeth sweeps everyone off their feet with a gust of billowing electronica and Floyd-like psychedelia. If Syd Barrett is listening he’d be tickled pink.
They close with possibly their best rendition of Two Islands to date – the lights blacken, Andrew Hunt‘s eyes roll back into their sockets as brother Nick crouches and twists notes skyward as metronomic wonder Dave Berger guides the Deaf Institute into the heavens. They leave to unanimous applause – next stop The Royal Albert Hall.
New Jersey’s Real Estate complete a whopper of a line-up from always-on-the-money hosts Now Wave – and in keeping with the rich heritage of US college rock they chiefly borrow from (REM and fellow New Jersey collective The Feelies, the obvious touchstones) they excel in a straight-up jangly pop which twists its way into your subconscious.
There’s a beautiful simplicity at work in the way Kinder Blumen and Green Aisles, tracks from last year’s much-lauded Days, waft by, rarely changing pace but simply stick to the script immersing you in a heady daze.
When they do break out into longer jams it’s merely cyclical meanderings as Martin Courtney and Mathew Mondanile trade intricate picked riffs as bassist Alex Bleeker keeps them on course with a steady thrum.
It’s a testament to their melodic verve that a band of their ilk can stir up such a little storm and make it look so effortless. Nice and easy.