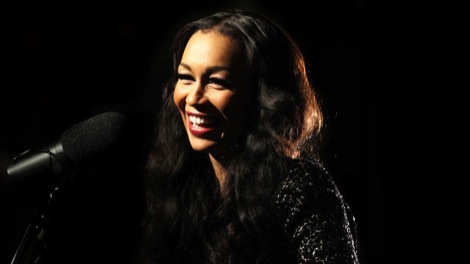 Ahead of her two-night residency at Liverpool’s Philharmonic Hall, Getintothis grabs five minutes with Rebecca Ferguson.

Getintothis: Hello Rebecca. Hope you’re having a lovely day. What’s your favourite biscuit?
Rebecca Ferguson: My favourite biccie is a fig roll or a Jaffa Cake – if you can call that a biccie… It baffles my mind!
Getintothis: Don’t let it baffle you too much, Rebecca. Loving the new video, it looks like you’re walking down Bold Street. What’s your favourite street in the world?
Rebecca Ferguson: Haha! The best street in the world is Park Avenue in New York. I love the shops and the walk to Central Park.

Getintothis: Fairytale is another belter on the album – what was your favourite childhood fairytale?
Rebecca Ferguson: Cinderella. I think every girl loves Ci.
Getintothis: I was always more of a Snow White fan. My mate can’t leave the house or leave his car without checking it’s locked about eight times – do you have any strange quirks or superstitions?
Rebecca Ferguson: I’m the same, I have OCD about keys and locking doors – I’m weird like your friend – ha!
Getintothis: Your floaty red dress is a bit lovely – it makes us wish it were summer. As a dedicated fashion-loving Scouser where do you like to shop?
Rebecca Ferguson: I love to shop in boutique shops and in London. William Vintage is the best store I’ve been in for clothes.
Getintothis: My favourite track on Heaven is Diamond To Stone – I can imagine you and Prince doing a mean collaboration. Which is your favourite track on the album and who’d you like to do a special collaboration with?
Rebecca Ferguson: I love Prince‘s music!
I love Too Good To Lose and Teach Me How To Be Loved. I would love to do a collab with Kings of Leon or Drake.

Getintothis: Drake’s a top fella. He reads Getintothis all the time. Now, you’re holding a dinner party – which six guests (they can be dead or alive) would be on your fantasy dinner party guestlist?
Rebecca Ferguson: I would pick Marilyn Monroe, Audrey Hepburn, Elvis, Michael Jackson, Whitney Houston and Aaliyah.
Getintothis: I can imagine you doing a mean James Bond theme tune – what’s your favourite Bond flick and if you were a Bond girl who’d be your ideal James Bond?
Rebecca Ferguson: I don’t know. *lots of thinking* I quiet like the current James Bond – he’s a bit fit like! Ha!

Getintothis: Final question. You regularly tweet words of wisdom – so leave us with some good advice, Rebecca.
Rebecca Ferguson: Treat people how you would like to be treated. Don’t look down on anyone, you don’t know where they’ve been.
Getintothis: Sage advice, Rebecca, you really don’t know where they’ve been. Always make sure they’ve washed their hands.
Rebecca Ferguson plays The Philharmonic Hall, Liverpool on Friday March 9 and Saturday March 10 and Liverpool Echo Arena on Saturday March 17.