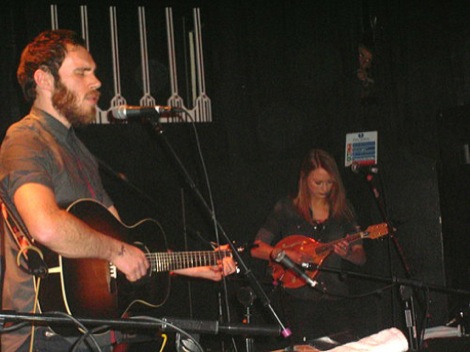 It’s hardly surprising that James Vincent McMorrow‘s gig at the Kazimier sold out as quickly as it did.
He played to around a hundred people at The Static Gallery last year, and to little more than 30 at The Deaf Institute in Manchester just a few months before that.
His slow and steady rise to acclaim was catapulted at the end of 2011 with, as it is for so many these days, a cover song on a TV ad. No sooner had LoveFilm launched the Higher Love advert (yeah, that’s him) than the Kaz had sold out.
And it seems numbers have been increasing onstage too as McMorrow was accompanied by his new band.
At his solo performance at The Static Gallery last year, McMorrow showcased the raw and intimate nature of his album Early in the Morning, which was written and recorded in self-imposed seclusion on the Irish coast.
This year, he is still touring the same album, but you might not have guessed it. With the band, McMorrow achieves a greater wealth of sound, each song growing from a quiet whisper into surges of incredible reverberation, yet his poetic lyrics still wow audiences into a pin-drop silence.
The group are obviously still finding their collective feet, but moments of utter brilliance, such as the sudden end to From the Woods saw shared looks of delight between McMorrow and his new band mates.

McMorrow resumed his solo status on stage for some of his softer songs, sitting at the keyboard face to face with fans in The Kazimier‘s intimate surroundings. Alone in the spotlight again, fans were reminded of his incredible personal talent as a musician and song smith, heartily applauding the control and range in his vocals mid-song.
New fans voiced their delight when McMorrow‘s cover of Steve Winwood‘s 80s classic Higher Love made its appearance, as did the sea of cameras towards the front of the audience.
It is a sing-a-long classic, but some fans obviously didn’t account for McMorrow‘s altered tempo as an eager woman in the gallery began every verse just a second or two earlier than McMorrow.
Despite the giggles which erupted around the venue, McMorrow maintained his straight-faced intensity throughout the song, but closing the gig he thanked Liverpool for such a ‘fun’ night.
And it was, out-of-time sing-a-longs, Dublin hecklers, and love for new band-mates Turloch and Fergus – what more could you ask for on a wintery Wednesday evening?