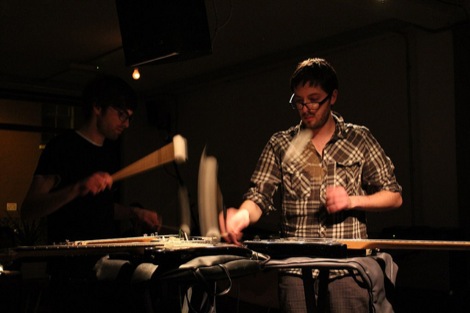 From the ridiculous to the sublime, GIT Award nominees Ex-Easter Island Head’s beautiful noise has earned them fans far and wide but as Getintothis’ Will Fitzpatrick learns, it’s Liverpool’s openness to experimentation which has spurred them on.

‘Sheer boredom leads you to do ridiculous things,’ admits Ex-Easter Island Head‘s Ben Duvall.
This is unnecessarily modest, of course – ‘sublime‘ is a far more fitting description for the experimental ensemble. Which makes it all the more fitting that they’re amongst the nominees for the inaugural GIT Award.
Ben describes their work as ‘music for solid-bodied electric guitar, percussion and other instruments‘, but that only hints at the breadth and scope of their sound.
Completed by fellow member George Maund, plus a rolling cast of friends and associates, the collective gathered a steady wave of interest following 2010’s Guitar Mallets One 12″ and some captivating live performances.
It’s a record dominated by soft tones, No Wave-esque drones and syncopated rhythms, all created by hitting the guitars with percussion mallets to form meticulously-arranged soundscapes. The overall effect is both unusual and immeasurably beautiful.
‘It started when I put a guitar on a keyboard stand to see how it looked,’ Ben explains, ‘Then I thought, ‘I can get something out of this!‘
‘It draws on minimalism – particularly Steve Reich and Terry Riley – ambient music, drone and modern composition.‘
‘Our first concert was performing ‘Terry Riley In C’ with the a.P.A.t.T. Orchestra, and after that we did the first Ex-Easter Island Head gig – the two, for me, are very complimentary to each other.‘

Indeed, comparisons with the many guises of the a.PA.t.T. are well-founded. On the surface, Ex-Easter Island Head may share very little with Merseyside’s favourite sonic scizophrenics, but Ben sees them as like-minded figures in the local scene’s commitment to pushing the envelope.
‘There’s a long tradition of experimental music here – there’s just an openness, isn’t there?
‘Basically Liverpool’s been very good to us, in that there’s ample opportunities to see bands where it isn’t just guitar-bass-drums.
‘I dunno if anyone else has done what we do here. I think people just appreciate you having a go at something else, even if it doesn’t fully work. They can respect it.
‘That’s why we have a healthy noise scene. The intention can be enough sometimes.‘
He bashfully admits to being ‘very pleased‘ to be nominated in the GIT Award.
‘I think it’s a continuation of what Getintothis and various others have been doing: creating a narrative. It’s essentially opening up a dialogue locally. It’s a healthy stimulant.‘

Meanwhile, the ensemble have plenty of projects lined up for the future, including the long-awaited Guitar Mallets 2, an installation project and an appearance at Nottingham’s UK Young Artists festival in September. Visibly excited by this vigorous schedule, Ben offers some insight into future ambitions for Ex-Easter Island Head.
‘I’m just happy collaborating with friends who I really respect musically,’ he says. ‘I wanna keep releasing records, I wanna go on tour, I wanna do all the usual stuff. And see how far we can go with the more… er, arty projects.‘
‘Obviously everyone who plays music would love to do it as their job. I can’t see that happening with this.‘
Pause.
‘Yet.‘
Getintothis reviews Ex-Easter Island Head at the World Museum and at the Kazimier.
Follow Getintothis on Twitter for more GIT Award updates.