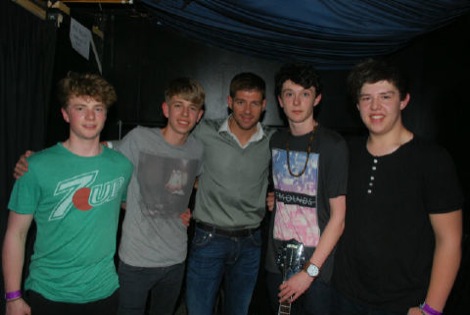 Liverpool Football Club’s Steven Gerrard made a guest appearance at the Kazimier at the weekend – and Phil Collins wasn’t even playing.

Spotting Steven Gerrard surrounded by a posse of orange-faced party posers and a gaggle of screaming ladies isn’t anything out of the ordinary.
That these events unfolded in The Kazimier on Easter Saturday, made for strange viewing.
The antithesis of all things celeb culture, The Kazimier was brimming with giddy youngsters clutching camera phones, Concert Square types glad-ragged to the nines and even the odd Hollyoaker looking distinctly out of place in the bar usually reserved for absinthe cocktails.
Critics and cynics must have had a field day, yet for the brief time Getintothis was in there, the atmosphere was nothing but fun-filled.
It seems, the Liverpool FC legend popped in to catch young band Tiro Lark who were part of the extensive two-day Resurrection Festival billing.
Tiro Lark recently played at Sound City Youth‘s battle of the bands competition at the Epstein Theatre – a venue which will take centre stage at the forthcoming May festival.
During the course of the two days, the likes of Bird, Get Back Colquitt, Coffee and Cakes for Funerals, The Hummingbirds, The Mono LPs and GIT Award nominee Esco Williams played in the Kazimier – the event moved from it’s original setting The Black-E at the 11th hour.
Getintothis will have reviews from Resurrection Festival and Mello Mello‘s Pete Bentham-curated Free Rock & Roll festival during the coming days. In the meantime, get your lugholes round Tiro Lark…