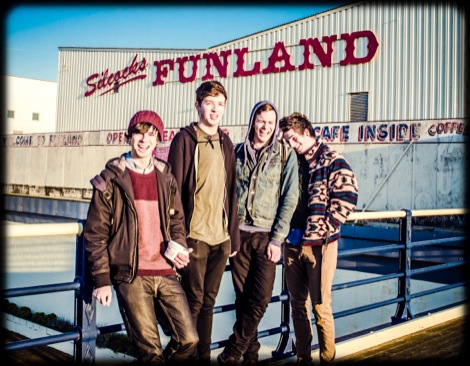 The youngest GIT Award nominees, Ninetails are ready to whip up a storm – we strive to be technically masterful, they tell Getintothis’ Tom Jefferson.

New kids on the block Ninetails arrived on the Liverpool scene with such a bang that they’d be impossible to overlook in any kind of hotlist for 2012, let alone the first inaugural GIT Award.
In the 12 months that have passed since their formation, the second year LIPA-ites have signed to Superstar Destroyer Records and had debut EP Ghost Ride The Whip sell out in less than two weeks.
Despite having only a handful of gigs under their belts, support slots with Errors, Three Trapped Tigers and Dutch Uncles have continued their impressive rise and increasing critical acclaim from the likes of BBC 6Music.
Getintothis caught up with bassist Phil Morris who, nursing a hangover, gave us the bands reaction to the nomination and their plan for 2012 domination.
‘It’s absolutely amazing news really. To be recognized in the top 12 acts in Liverpool is just amazing,‘ he enthused.
It is easy to lump Ninetails (a reference to the whip not the Pokemon) into the category of math/post-rock, but in truth they cast their musical net far wider.
US indie, grime, downtempo and psychadelica all add depth to their tight, informed sound.
I
Underlining everything they do is the ability to pick out great melodies, and Phil highlights this as what makes Ninetails stand out.
He said: ‘We strive to be technically masterful, but it’s got to retain that commercial element, that chorus, that melodic hook.‘
And their striving seems to be paying off, latest release Rawdon Fever is surely their most sophisticated and complete work to date.
Although not structured in a commercial way, it is awash with melodies than are catchy and entrancingly complex, and has a beautifully cut animation video to boot.

The band, who met and formed at LIPA hail from Chester, Sunderland, Stoke and Washington DC respectively, but Phil is quick to dismiss any thoughts that they are not a Liverpool band.
He said: ‘We were formed here, we all live here and we all love Liverpool. If we’re not a Liverpool band then what are we?‘
He adds that Liverpool’s influence on their music is massive: ‘The level of musicianship is so high, you can see something special anywhere in Liverpool and that’s why I love it.‘
Whether they win The GIT Award or not, Ninetails have strong aspirations for 2012.
As well as playing a number of festivals, Phil reveals to us that they will be releasing their debut album later in the year for which they have high hopes: ‘Hopefully it’s gonna be a big year for us. And we’ll definitely be making a splash with the new album.‘
Ninetails‘ debut EP Ghost Ride The Whip is out now via Superstar Destroyer Records followed by their debut album proper later this year.