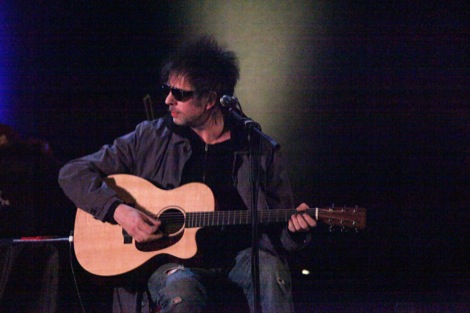 Ian McCulloch launches the Epstein Theatre with ‘classic after classic’. That’s what Mac the Mouth tells us – and as Getintothis’ Andy Kelly reports, he’s not far wrong.

It’s opening night at Liverpool’s newly-refurbished Epstein Theatre (Neptune as was) and who better to kick things of than Ian McCulloch.
I’m not sure the man who now lends his name to the venue would have approved of Mac’s traditional jeans, anorak and shades combo for the night – he seemed to favour suits I seem to recall – but I’m pretty sure he would have enjoyed everything else which followed.
There’s a relatively modest crowd in for the first of two seated acoustic shows – the Friday show is close to a sell-out – which not only launch the new theatre but also offer a glimpse at McCulloch’s fourth solo album, fan funded and due out imminently he assures us.
And the great news is that what we get of the new songs seem genuinely exciting and slip effortlessly into a setlist which spans early Bunnymen tracks right through previous solo work and up to that new album. 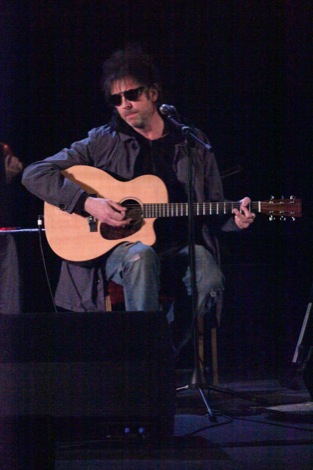 Ian McCulloch plays the inaugural gig at the Epstein Theatre
By his own admission Mac’s a bit husky tonight, possibly evidence of too much shouting during that wretched first hour at Wembley last Saturday, and it does show in his voice, especially on those whispered low notes. A couple of tracks are started and abandoned though everyone’s having such a good time it hardly seems to matter.
Sitting centre stage and slugging his way through several glasses of red wine, Mac is flanked by old pal Ian Broudie on wonderfully understated guitar, a keyboardist and a small but impressive string section of cello and violin.
There’s no waiting around for the old favourites with Rescue and Bring on the Dancing Horses setting a celebratory tone right from the off before The Idolness of the Gods brings the Bunnymen songbook much more up to date.
Pro Patria Mori is the title track of the new solo album and it won’t surprise anyone to hear Mac describe it as the ‘best song I’ve ever written‘.
As the title might suggest it seems to be a protest or at least song of scepticism of battles being fought in foreign lands as we speak: ‘I asked him why he bled and he said – pro patria mori‘.
I wasn’t sure initially about the ‘la, la, la‘ middle section but by the end I was wanting to hear it again straight away. Rust and The Fountain are another couple of more later-era tracks which are just bursting with melodies and keep up the momentum. 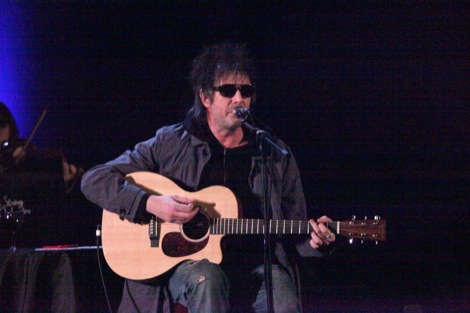 Ian McCulloch live at the Epstein Theatre
Another new song arrives with Watch Me Land with the strings delicately spiralling into the ground to round off what the crowd seemed to agree with Mac was ‘an instant classic‘.
We’re back to the 80s for All My Colours (Zimbo) with its lovely minor chords and that string section earning its fee again.
‘Bloody hell, who’s that? Thor?‘ laughs Mac as a booming voice from the back pleads for The Cutter. He doesn’t get it but another classic does arrive. NASA loved The Killing Moon so much they used to play it to their space shuttle pilots and it still sounds as great back on earth.
Somewhere for my Dreams is introduced as ‘another classic, if we play it right‘ – they do and it just might be – before the sweeping Nothing Lasts Forever completes a superb main set.
Two brief encores start with a moving cover of Somewhere from West Side Story before Lou Reed time arrives, this time in the shape of Walk on the Wildside.
It all ends with an appropriately shambolic Lips Like Sugar, ‘Liverpool kisses‘ the last two words said on stage tonight.
Classic songs, brilliant new tunes and banter aplenty – from Jonjo Shelvey‘s ‘sallow eyes‘ (he likes him) to Jordan Henderson (he doesn’t) to Bruce Springsteen ripping off The Life of Riley – allegedly!
What more could a new theatre ask for?
Pictures courtesy of Dave Munn.