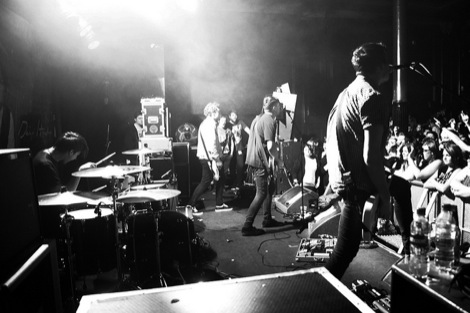 Seconds out, round two, and the O2 Academy is a less scary place than on opening night. The swathes of massive haired teens, swapped for a more casual checked shirts and light beards crowd.
The night does not get off to a great start though with Scottish outfit Crusades being about as entertaining as a Jim Davidson career retrospective. Their by-the-numbers punishing metal being thwarted by piss-weak chihuahua like vocals. Vukovi don’t fare much better, teaming sub System of a Down instrumentation with vocals that sound like a bad Tori Amos impersonator.
Thank God then for Don Broco who used every trick in the book to get the crowd to start giving a shit. Piggy back mosh-pits, old-skool Slayer-esque walls of death (but far tamer), circle pits and even some well choreographed ‘running men’ from the lads on stage all went down a treat, with their perky hard pop-punk providing a great soundtrack for a crowd truly starting to warm up.
Headliners Lower than Atlantis soon arrive to rapturous fervour, with opener Motorway of Life sending the pit into spasms of pogoing and flailing. Owing debts to Hundred Reasons and Reuben, LTA’s emo-twinged melodic hardcore sits well with the punters, despite some weak vocals on display.
Vocalist Mike Duce doesn’t exactly endear himself to the crowd, urging as many people as possible to crowd surf so ‘the photographers down the front break their cameras‘.
He further loses his rag at the crowd not obeying his every whim leading him to bark ‘fuck Sound City, you’re at a Lower than Atlantis gig,’ a remark which does nothing but make him look like a monumental bell end. Shame, as dickish remarks and an ill-advised Foo Fighters medley aside, this was quite a polished set.
After LTA wrap up it’s over to Liverpool’s most celebrated cess-pit the Krazyhouse, to see four-piece Wirral post-hardcore outfit We Were Beautiful, whose Jimmy Eat World-esque power pop deserves to be seen by more people.
The Kray’s ming infested PA makes all but the vocals sound jarg, which is a crime because before the right crowd they have the ability to get all and sundry bopping like mental.
The crowd were good enough though, with all walks of life intermingling, from the group of pirates (complete with plastic flintlock pistols) to the hammered bird swaying with a can of Red Stripe firmly grasped in hand. If that’s not what Sound City is about, then frankly we don’t want to know what is.
Picture courtesy of Joe Speak.