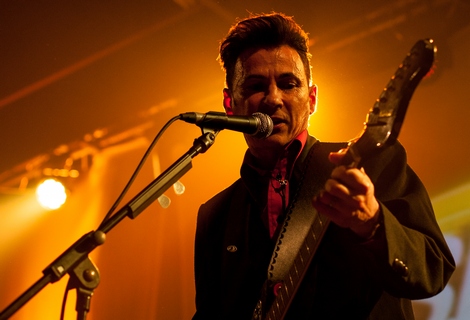 Liverpool Sound City day three sends Getintothis’ Rosanna Hynes in search of new talent in a coffee shop and in search of some Scouse old schoolers in an art academy. Whatever next, a Theme Park in a Garage? Yup, that too.

Getintothis‘ evening began at the busy Bold Street Coffee, with the quiet harmonies of Like Spinning.
A pared-back set, with just their two lead female vocalists and an acoustic guitar, the girls performed a string of pretty, delicate and subdued songs, and were well-received, managing to silence the room to the point at which the staff weren’t even making drinks, so as to preserve the atmosphere.
The next artist taking the floor was Ben Salter, who performed a short set of raw songs accompanied by unobtrusive guitar. The vaguely morbid lyrics set a sad tone to the set, but the applause was loud and genuine for this talented Australian songwriter.
Finally up was Alex Hulme, a baby-faced Liverpudlian whose brand of summery acoustic pop music lightened the mood considerably.
After getting everyone’s attention with a loud wail which opened Old Man, Hulme went on to sing out in his strong, tuneful voice, holding his own even as the hen parties cackled noisily outside.
Hulme stomps on the floor petulantly, screws up his face in a pained expression as he hits the high notes, and generally puts on a great acoustic show, rather than following the trend for sitting motionless. Comparisons with Ed Sheeran are inevitable, but there is also the attitude of KT Tunstall, which is definitely a successful combination.
Theme Park played the Red Bull Studios at the Garage fresh from their tour with the Mystery Jets, and the tiny crowd must have been something of an anticlimax.
Despite this, the skinny youths put on a performance that got the audience dancing, with a selection of indie pop hits reminiscent of a funkier version of Franz Ferdinand. 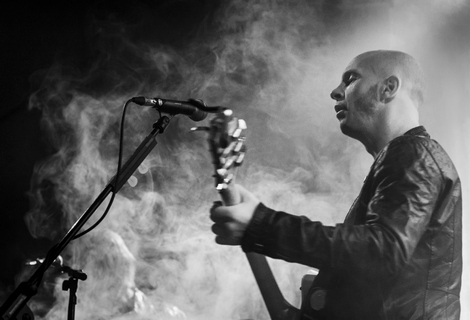 Space live at Liverpool Sound City 2012
After that, we hotfooted it over to the Art Academy, to see the much-anticipated Space.
These guys blew us away with their first number, as they engulfed the dingy venue in their signature catchy pop.
They played a good selection of both old and new stuff, proving that they still have what it takes in their new incarnation.
Despite the heaving mass gathered new tracks were met with a muted response, however, once the old classics – Avenging Angels, The Ballad of Tom Jones, Neighbourhood and Female of the Species – were unleashed everything seemed just right. Just.