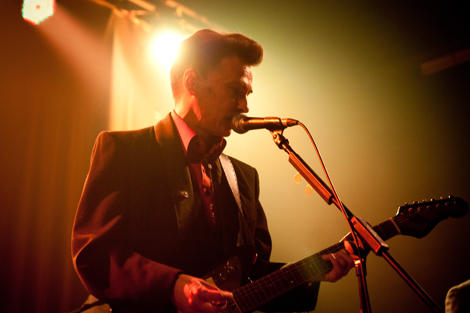 Liverpool Sound City 2012 serves up some Brownies, Space kebabs and a slightly dodgy bit of fruit pie for Getintothis’ Orla Foster on her last date at the festivities.

It’s not many performers who can break off mid-song, announce they’ve lost their plectrum, have a good rummage in their pockets and then roll back into the song as though nothing had happened – the audience grinning ear to ear throughout.
But for Chris McIntosh, whose band Silent Sleep are tonight gracing the Zanzibar, it’s just second nature. McIntosh, who also plays with 28 Costumes, has a way of grabbing the crowd’s attention with his easy manner and repartee between songs.
But after the laughter, they are reaching for their handkerchiefs as he launches into gentle shanty On the Steps of the Bombed Out Church.
Then the amps are driven up a notch for Norwich act The Brownies. Fresh-faced though they might seem, the band have been doing the rounds for several years now. Their blast of frenetic garage-punk seems a little out of step with any recent trends, instead evoking the likes of the Hives and the Donnas, but it’s a pleasingly hyperactive display delivered with a high school band spirit.
Before their last song, there’s a protracted dialogue about someone they know who being “a hot chick”, which is a bit confusing for everyone who isn’t in on the joke. Top marks for effort, though.
They’re followed by Low Roar, an Iceland-based outfit renowned for their bittersweet songwriting and softly-swelling crescendos.
Except tonight, vocalist Ryan Karazija is going it alone. Not that it matters; as the songwriter behind the project he is more than capable of delivering a set that is expansive, full and soul-searching.
People are nudging each other and trying to find out more about this elusive stranger in his flat cap and jacket, while others at the bar are visibly swooning. Not just from the Tuborg either.
After a quick detour watching Space sing about kebabs, it’s time to zip over to the Wolstenholme where Bleached are rattling their way through a giddy and breathtaking performance.
You know how “Ramones” and “60s girl bands” have become the catch-all descriptions for just about every new band going? Well, Bleached tick both boxes with a flourish, which, on paper, might be slightly off-putting. Live, however, it’s a different story.
The trio bring a welcome energy into the venue, calling to mind all the best girl bands of yore, like Niki & the Corvettes, or the Go-Gos.
Last up are The History of Apple Pie, London’s latest lo-fi export. They look the part, with artfully dishevelled beautiful hair and slightly crestfallen expressions. As they start up, sugary sweet vocals cut through 90s distortion while the band look shyly downward. To all appearances they’re treading the same boards as The Pains of Being Pure at Heart and Yuck.
The problem is that in falling back on old shoegaze habits, it can become difficult to tell how much of The History of Apple Pie is simply homage to the likes of Sonic Youth, and how much can be credited to the band themselves.
Of all their material, it’s single Mallory that comes off strongest tonight. An enjoyable set, but they may just need to work a little harder to carve out an identity.