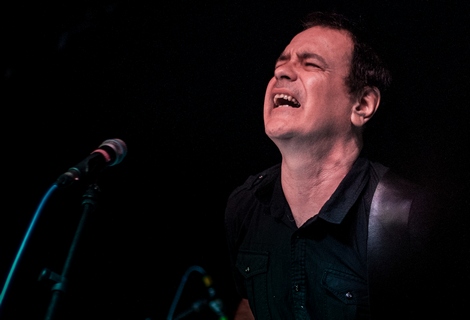 So it is with a tear in my eye that Getintothis begin our final day’s jaunt at Liverpool Sound City. After the last couple of days sublime and very tiring scenes we’ve have big, big plans for today. This is gonna be a monster and I’m getting right inside the belly of the beast.
Alas, the best made plans of mice and men and all that. Today was a relative bust, after witnessing some incendiary Aussie music we took in a burger at the BBQ at Heebie Jeebies. And then the burger took me out and continued to make me its bitch for the rest of the day and night.
Not only was this an issue but the rejigging of times and the inescapable problems with venues running late meant that we only ended up witnessing two acts for the entire night before things got too heavy for me. Heavy salad. If only I’d stuck to that and eschewed the meat.
Purveyors of angst-riddled indie rock The Wedding Present were somewhat subdued at The Zanzibar.
Though there were moments when The Gedge and his crew ratchet up the noise and thrash out some crowd favourites with a performance that suggests both nonchalance and unbridled pain. He swells in front of me slashing at his guitar like lumberjack doing what lumberjacks do best.
The set was a nicely balanced snapshot of their bulging back catalogue and whilst there were no moment whens heads stopped bobbing and shaking or toes and heels tapping the crowd did not really have anything to go batshit crazy over. This was a constant powder keg of a gig.
Gedge held us in the palm of his hand and toyed with us, had he played Brassneck you would’ve seen The Zanzibar torn down by a throng of balding, angry, awkward men. Kennedy was unleashed which excited, though given my state I had to restrain myself from dancing like a live frog in a blender on pulse.
For all of my moaning this was a pretty tight effort which whilst being enjoyable did not live me extolling the virtues of a Wedding Present live gig. There was always potential. Tender, swaying, jangling guitar laced moments mixed with high tempo, thumping bass and unrelenting drum. Then they went to the back of the room to sell t-shirts. 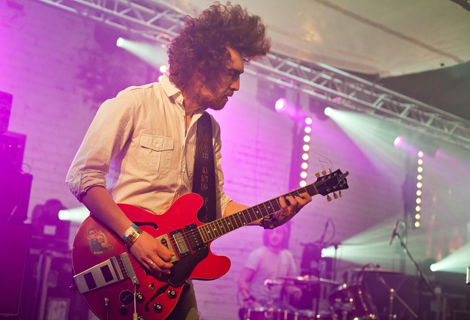 Hey Sholay live at Liverpool Sound City 2012
A blinding white light is shone on the sparse crowd at The Garage in Wolstenhome Square (big car park populated by about 20 swaying souls) leaving the silhouetted Hey Sholay on stage.
They look thoroughly alone and mysterious. There are moments which threaten to excite but the whole affair lacks any sort of snap, crackle or pop. In between songs they engage in polite banter with the few people present.
To give them their due they seem pretty sound and create a vaguely anthemic sound. However, their passion gets lost in the vastness of the concrete, laden venue. In a more intimate gaff this lot would be quality.
The Bears, The Clocks, The Bees finishes off and it’s a swelling barnstormer. This early slot can always be a pain to perform and while Hey Sholay don’t disgrace themselves they leave me with a slightly underwhelming feeling.