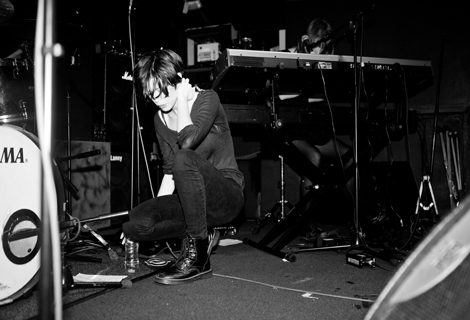 Liverpool Sound City 2012 offers up the best hair of the festival and the female Dave Grohl – Getintothis’ Andy Kelly is suitably impressed.

Hailing from Sydney, The Jezabels are a four-piece indie outfit who certainly seem to inspire devotion.
Zanzibar is packed with the odd bit of sweat dripping from the ceiling. A drunk bearded man in front of me is frantically waving a walking cane as singer Hayley Mary (two first names, surely) swings her hair furiously centre stage.
The problem for me is she’s not enough centre stage, because it’s Mary’s voice which will set Jezabels apart from your average indie-by-numbers alternative rock act.
At times when she swoons towards the higher end of the spectrum you get a feeling you could be listening to a young Kate Bush so unique is her sound. But for some reason the band drown her out all too often amid swathes of guitar and keyboards that are enjoyable but hardly stand out in the indie checkout queue. 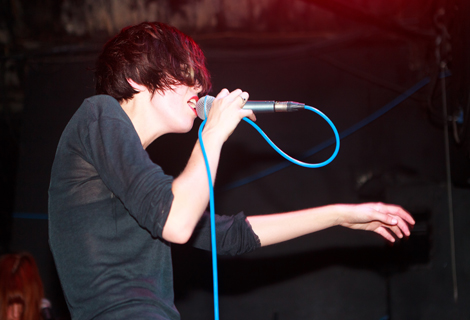 Jezabels live at Liverpol Sound City 2012
The singer has star quality and may already be on several bedroom wall posters. I’m two songs in before I can actually confirm she has eyes as she hides beneath that floppy fringe which she throws from side to side. Best hair of the festival for sure!
At times they get the mix right and you can see how they could be great but those moments just don’t happen enough right now. I really wanted to love them but – inhospitable as it sounds – I’m afraid it was a miss for me tonight.
No band I’ve seen at the festival seemed to be enjoying themselves as much as Dead Wolf Club, a band full of thrashy punk attitude and garagey DIY tunes which hint at a record collection which has a good few Sonic Youth and Ramones records in there.
It’s not exactly polished but that’s not what we’re after and there’s something great about seeing a drummer giving it so much welly she keeps eating her hair by mistake! A female Dave Grohl is born.
The closer News at Ten sees the lead guitar thrown into the audience and the frontman on top of the drum kit as they turn the punk spirit up to 11. A glorious fuzzy blast of the rock n roll spirit.
Pictures by Conor McDonnell.