Liverpool Sound City witnesses an emotional evening at the Epstein, Getintothis’ Emma Walsh soaks up an incredible night in the city.

Day three of Sound City and it was a relief to ease into the final night with a comfy seat and pleasant surroundings at The Epstein Theatre.
Hey Carrianne kicked off the night with some folky rock sounds, dipping into 80s guitar riffs on Someone Else’s Boat, and flirting with ska on the finest-named track of the festival, Pervy Gin Man.

The Night live at Sound City 2012.
After an upbeat, playful performance from the beautiful Carrianne and her ‘cloudy-piss’ drinking band, The Night changed the tone to a more serious, sophisticated, and frankly boring, set of melodic tunes and floaty arms.

Dan Croll and Joe Wills at Liverpool Sound City 2012
But Dan Croll filled the house, kicking off with the crowd-pleaser Marianne. The gig is something of a homecoming from Croll, as the band reminisced on their final LIPA showcase almost a year to the day.
Liverpool’s musical influences showed themselves in a song entitled Norwegian Wood (not The Beatles original) but Croll’s songwriting is also showing the influence of his peers. His first single It’s Always Like This would not sound out of place on the set list of band-member Jethro Fox who also graced the Sound City stage this week.
An emotionally charged performance with the recent passing of guitarist Joe Wills‘ mother, Croll dedicated final song, the brilliant, Home to her memory.
His song-writing has a way of leaving you nice and fuzzy inside, a perfect state of mind to await headliner James Vincent McMorrow.
This is third McMorrow gig Getintothis has attended in a year and every time he gets a little trendier and a great deal more confident in his own performance.
His band too, is noticeably tighter and McMorrow seems more comfortable projecting his voice above their sound.
They create amazing swells of sound that silence the audience with songs such as We Are Ghosts and when he takes to the keyboard alone, we know what is coming.
McMorrow really has made 80s classic Higher Love his own, but this formula is all a little familiar for a regular like myself.
Yes, songs such as We Don’t Eat and If I Had a Boat have reached the glittery heights of mainstream popularity but come on Jim (we should be on first name terms by now) surely there must be some new material in the mix?
All folked out, it was invigorating to walk into Mello Mello for the final songs of Polish band Paula and Karol who were banging out a high-spirited, boom box performance of ‘Can I kick it?’. 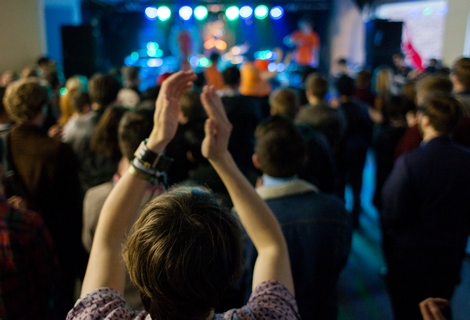 More satisfied music lovers at Sound City 2012.
It was a bit of ‘We’re not in Kansas anymore’ moment but that might have had something to do with high volume of zombies floating about after the 2.8 Days event.
Watching them head bang to punk rockers Flat Back Four was even more bizarre. A fitting end to a great few days of music, Flat Back Four brought Mello Mello to life with mini mosh pits and a tribute to Liverpool punk rock with a cover of local legends Crocodile God.
By the end though, the punk rock dads in the crowd were starting to fade, and after three days I wasn’t much better.