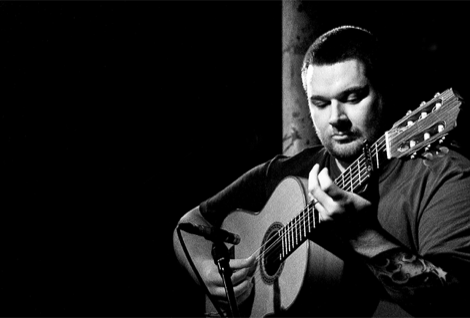 RM Hubbert is fricking awesome, to begin with.
That’s one thing we need to clear up first of all. Delicately-arranged acoustic guitar instrumentals form the backbone of his oevre, which admittedly doesn’t look like the most thrilling description on paper, but this is more than the sum of its parts.
It’s beautiful, flowing, emotive music, as full of narrative and emotion as any lyricist you’d care to mention. Every last chord of the reflective Hey There Mr Bone is left to hang heavy in the air, pregnant with sorrow and loss.
Then there’s Hey Maria, all wide ayes and wonder, as explicit in its emotional sincerity as the rawest of teenage crushes. Breath-taking? Hell, I’m practically handing every exhalation over to him. This is wonderful music.
You could use words like ‘cathartic’ if you wanted – Hubby would be the first to agree with you.
An engaging storyteller, he explains how he effectively uses performing as a form of therapy – an answer to, if not quite a cure for his chronic depression. It’s an uncomfortable subject for his audience to process, he admits, attempting to laugh it off with banter and affectionate abuse towards recent collaborator Aidan Moffat (‘I hate the cunt!‘).
But this blunt honesty suits him just fine, whether sharing human experience or treating us to his wordless yet articulate art. He’s a treasure, alright.

Nantes trio Papier Tigre are a bit different. Which is to say they’re extremely loud.
The gnarly riffage of set opener Home Truth shoves pencils up our noses and saws off our earls, with Eric Pasquereau‘s ragged larynx asking, ‘IS IT A LIE? IS IT A LIE?‘ with nary a care for the answer.
Dismantle the machinery of this full-pelt racket and you might find elements of Fugazi and Jon Spencer Blues Explosion, but in the main this is good ol’ fashioned noise rock. And it’s pretty exhilarating.
Heftily-smacked drums abound, along with razor wire guitar riffs that repeatedly lurch to and fro between undulating post-punk stutters and jarringly-abrasive blasts.
Think Scratch Acid or Big Black and you’re not far wrong, although it frankly does Papier Tigre a disservice to implicitly write them off as mere imitators of a thirty-year-old scene.
Instead, imagine having bamboo shoots shoved under your fingernails and your eyelids delicately removed by a proud master of mutilation. If, even for the vaguest of seconds, you’ve considered that there might be anything even remotely enjoyable about it, you’re one sick fuck. Meet your new favourite band.