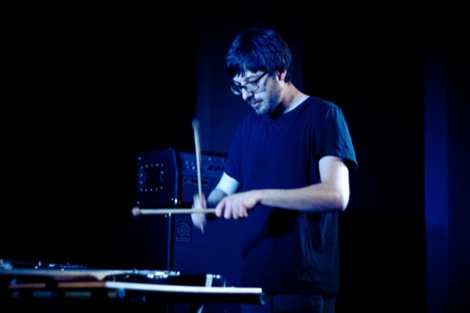 The GIT Award 2012 served as a first-rate introduction to artists, musicians and music fans alike – and as Ex-Easter Island Head tell Getintothis, they’re ready to strike up partnerships with some of those nominated.

It’s fair to say, Ex-Easter Island Head were the curve ball of the GIT Award 2012.
A curve ball musically, but also a name which was familiar with very few prior to the nominees being announced back in March.
Yet, on the night, their selection made perfect sense – here was a band showcasing incredible music which was completely of its own. And as their set reached it’s remarkable conclusion, the crowd were bouncing along to Ben, George and Jon’s transcendental beats. That too, somewhat of a surprise.
The band themselves were also surprised by many of the nominees also listed. New names like Esco Williams and Miss Stylie became instant favourites as the Award turned a spotlight on Liverpool’s rich musical diversity.
Getintothis caught up with Ben Duvall and George Maund in the days after the GIT Award 2012 to find out what’s next.
Getintothis: What did you make of the GIT Award 2012?
Ben Duvall: ‘A great inaugural event with an eclectic and unexpected shortlist.
‘Also considering the logistics of it all – ten bands on one stage – I thought it did well to run pretty much to time. So all credit to Jon, Danny and Tony!’
George Maund: ‘The evening was for me about introductions.
‘Ex-Easter Island Head‘s music was introduced to a panel of people we’d like to be heard by, and an audience who might not necessarily know of us.
‘I was introduced to Miss Stylie and Esco Williams, both of whom I feel quite ashamed for not already knowing about.’ 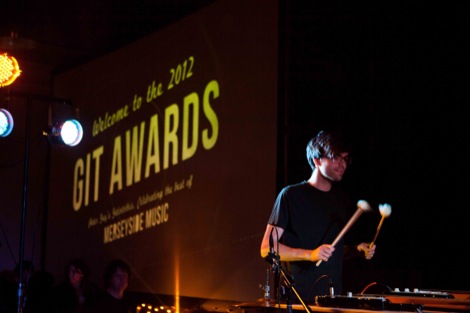 George of Ex-Easter Island Head performing at the GIT Award 2012
Getintothis: What message did you think the GIT Award sent out?
George: ‘I hope the GIT will function as a rallying call for the disparate quadrants of Liverpool’s music community to work together.
‘I’ve already seen people start to put the feelers out for collaborations, gigging together, remixing each other.’
Ben: ‘Primarily, it confirmed that Liverpool doesn’t have one overarching music scene but a good many different scenes existing and functioning almost independently of one another.
‘Good though it was that representatives from these different scenes were sharing the same stage for the night, I found it quite reassuring that there is so much confident music making going on that many of the bands were completely unaware of each other prior to the night.
‘It provided an interesting juxtaposition with a healthy level of friendliness and respect between some wildly different artists. There’s something to be said for sharing similar ambitions but not necessarily the same set of resources in terms of venues, promoters and audiences.’ 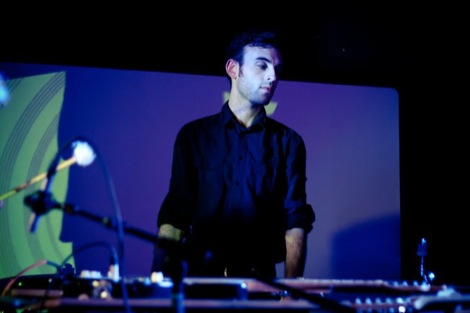 Ex-Easter Island Head’s Jon Hering at the GIT AWARD 2012
Getintothis: What were your highlights from the GIT Award 2012?
Ben: ‘Playing to a largely unfamiliar yet appreciative audience, having John Robb be a thoroughly nice chap with regards to our music and seeing our good friends Loved Ones scooping the prize.
‘Lowlights: missing Mugstar, Stealing Sheep and the free beer backstage.’
George: ‘Esco Williams was my favourite discovery, and the sound on the night was the best Leaf‘s had in my experience — shame on me for not knowing of his music already.
‘It’s grand the Kazimier got their shout-out too, and I’m made up for Loved Ones – as they were my Twop Twip to any gamble-a-holic that would listen.’ 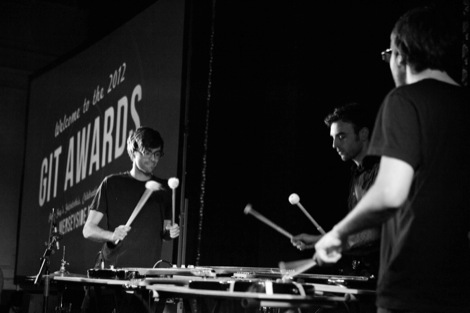 Ex-Easter Island Head in action at the GIT Award.
Getintothis: Thank you so much for the music and good luck for the future – what’s next for you?
George: ‘Mallet Guitars 2 – with our World Museum piece as the B-side – will finally see the light of day in August.
‘We’ll record Mallets 3 in the summer and I’d love to have that released in the autumn. We have a bass-guitar-oriented piece in its early stages.
‘In terms of other projects, Mother Earth‘s EP is being mastered, and we may have another record’s worth by the height of summer.
‘I’ll be steadily releasing Big Effigy tracks one at a time through Bandcamp and will put together an EP for Upitup at the end of that stretch.
‘I endeavour to keep playing solo guitar shows as Congresswoman throughout the year, gradually readying that into as viable a touring prospect as possible. That may in turn bloom into a whole ‘nuther ugly fruit of its own accord.’
Ben: ‘We’re debuting our new piece Mallet Guitars Three with two shows supporting James Blackshaw tonight (May 4) in Liverpool and again in Salford on Monday (May 6).
‘We then open for Tim Hecker at Sound City on May 17. We’ll also be releasing our second vinyl, Mallet Guitars Two / Music for Moai Hava over the summer (check here for details).
‘After that we’ll be appearing at World Event Young Artists 2012 in Nottingham (September 6-15) where we’ll be teaming up with some fantastically talented musicians to make several kinds of new, minimal-maximal racket/un-racket.’
Getintothis reviews Ex-Easter Island Head at the World Museum, Liverpool.
For a full interview and new music with Ex-Easter Island Head visit here.
Pictures by Marie Hazelwood, Matt Thomas and Conor McDonnell.